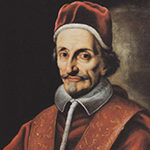 Pope Innocent XII was the twelfth pope to take the name “Innocent” and the 242nd person to serve as the final authority of the Catholic Church. Considering the sizable number of men whom have served as pope, it can be a bit daunting to keep all of the names straight, let alone the order of papal succession. This guide has been written so that Innocent XII will stick a bit more distinctly within people’s minds. This article will cover his time up to the papacy and highlight anything notable or commendable he did during his time as pope. The bottom is lined with stats about him as an individual and his papacy, as well as a handful of trivia points regarding him.

Antonio Pignatelli was born in the Apulia region of Italy to one of Naple’s most influential families, noted for its connections to several Viceroys and crown ministers. He was the penultimate, meaning next-to-last, child of Francesco Pignatelli and Porzia Carafa. His brothers and sister’s names were Marzio, Ludovico, Fabrizio and Paola Maria.

He pursued education at Rome’s Collegio Romano and managed to earn doctorates in canon and civil law. Upon reaching age 20, he was made an official under Pope Urban VII‘s court, made Referendary of the Apostolic Signatura and even served as governor for the towns of Fano and Viterbo. Antonio spent 1646 through 1649 as an inquisitor for Malta, then moved on to governing Perugia. It was only after this time that he would join the priesthood.

Pignatelli was made Larissa’s Titular Archbishop in the year 1652. He assisted the Poland’s Apostolic Nuncio from 1660 to 1668, then transitioned to Austrian diplomacy until 1671. 1671 would mark his transfer to Lecce. A decade later, in 16881, Pope Innocent XI would appoint him Cardinal-Priest of San Pancrazio. Pignatelli relocated to the see of Faenza in 1682. His final position beneath the pope would heppen in 1686, serving as the Archbishop of Naples.

As soon as he was in power, Innocent XII dedicated himself to purging the Church hierarchy’s history of nepotistic appointments.