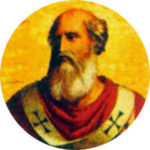 Serving as the 56th Pope, John II held the position for less than three years. Despite his short tenure, he managed to end a long-term conflict that plagued parts of the Church for several decades. While he was not honored as a martyr like his namesake, he did leave a legacy that improved politics among the clergy and laity.

Details about the early life of Pope John II are scarce. It’s believed that he was born around the year 473 in Rome. He was born as Mercurius, the son of Praeiectus.

Early records of Pope John II show that he was a priest at St. Clement’s Basilica. This church was on Caelian Hill, which is one of Rome’s seven famous hills.

During his time as a priest, he still went by the name Mercurius. Evidence of this was found on fragments of an ancient ciborium. On the drinking vessel, he was referred to as Presbyter Mercurius, which shows that his adoption of the John II name didn’t occur until his papacy.

After the death of John II’s predecessor, a two-month period of sede vacante occurred. There was no Pope to lead the Church, which resulted in some controversies among clergy and laity.

Simony ran rampant. Simony is the act of selling sacred church offices, roles, and items. The shameless trafficking of sacred things threatened the integrity of papal elections. The problem got so bad that it was brought to the Roman Senate. Eventually, the Gothic King Athalaric confirmed a decree that forbade simony in papal elections.

One of the Pope’s biggest accomplishments was opposing Nestorianism. Nestorianism was a heresy that was condemned by the Council of Chalcedon. Pope John II condemned a group of monks in Constantinople who adopted Nestorianism. He excommunicated them, effectively ending the Theopaschite controversy.

This decision also affected bishops who lapsed into Arianism, another heresy. He assembled 217 bishops to decide whether or not they should be excommunicated or allowed to keep their rank. Unfortunately, Pope John II died before he could take action for former Arian bishops.

-Pope John II was the first to not use his personal name.
-He was named after the Roman god Mercury.
-Pope John II adopted his papal name because he believed his birth name inappropriately promoted paganism.
-The body of Pope John II is buried at St. Peter’s Basilica
-John II is referenced on ancient drinking vessels and marble stones slabs in Schola Cantorum, which was a school to train singers for the papal choir.