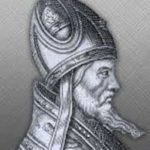 The 72nd man to hold the position of Pope, John IV worked to protect the Christian faith by condemning several schools of thought as heresy. He also took steps to preserve relics of churches destroyed by war, ensuring that they were not lost to history.

John IV was born sometime around 587. He was not born in Italy. Rather, he was a native of Dalmatia. Dalmatia was one of four historic regions of Croatia. He was born in Iadera, which is modern-day Zadar. The city is on the Adriatic sea, opposite of Venice.

The future pope was the son of Venantitus, who was a skilled lawyer. From this information alone, many historians believe that John IV’s family was of high social class.

John IV joined the Roman Church and quickly climbed the ranks. In 636, he was appointed archdeacon. In the very same year, he also elevated to the position of Cardinal.

Following the death of the previous pope, Pope Severinus, there was a four-month vacancy for the position. Pope John IV was finally consecrated on December 24th, 640. He was around 40 years of age at the time.

Before his consecration even occurred, John IV started to perform the duties of the pope. He wrote to the clergy of Ireland and Scotland, informing them of his opposition to the date of Easter.

After he took on the job of Pope, John IV also took a stand against heresy. He encouraged Irish and Scottish clergy to guard against Pelagian heresy. The Pope also condemned Monothelism as heresy. This action caused the Byzantine emperor Heraclius to immediately disown Monothelite documents.

During his tenure, Pope John IV focused his attention on pressing matters at home. His native land of Dalmatia was invaded by Slavs. In response, the Pope sent the abbot Martin to Dalmatia to redeem captives. While there, Martin also sent many important relics of Dalmatian saints back to Rome.

Pope John IV then erected a small chapel to honor those relics. After that, he set out to convert the Slavs that invaded Dalmatia to Christianity. He did this by sending Christian teachers to the area before his death.

-Even before becoming pope, John IV was considered a very cultured man. This is likely due to his upbringing in Dalmatia as well as the profession of his father.
-In a single year, he became both archdeacon and Cardinal of the Church.
-While he was leading the Church, he still sought to protect his homeland of Dalmatia.
-One of John IV’s last acts as Pope was sending Christian teachers to Dalmatia.
-Pope John IV is buried at St. John’s Basilica