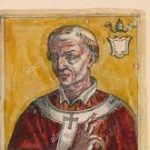 Elected as the 116th Bishop of the Catholic Church, Pope John IX was considered an intelligent and moderate leader. He made sweeping changes in Rome that would go on to affect the region well after his death. Much of his work was dedicated to ending violence and restoring order in the Church.

There’s not a lot of recorded history about John IX. His birth name and birth date have long been lost. From the remaining information available, historians believe he was born around the year 840 in Tavoli.

His father was named Rampoaldo.

John IX was a leader within the Church long before he became pope. He was ordained as a Benedictine priest by Pope Formosus. Around this time, factions came to Rome and tried to shake up the papacy. The factions attempted to get their own candidate to the throne. Because John IX was highly favored by the Duke of Spoleto, those efforts were futile.

The rival candidate was then driven from the city and excommunicated. Meanwhile, John IX elevated to the position of Pope.

Pope John IX started his reign in early January of 898. Immediately after his election, he went on to rehabilitate the reputation of Pope Formosus. The controversial pope had been posthumously charged. His corpse was exhumed in an attempt to declare that his papacy was illegitimate.

John IX supported Formosus. He held councils in both Rome and Ravenna. The final decision was that Pope Formosus was valid and deserving of Christian burial. He even ordered that the records against Formosus be buried.

The Pope went on to restore the ranks of deposed clergy as well. Another big accomplishment was ending the custom of plundering the palaces of former popes after their death. This act helped to preserve history moving forward.