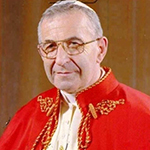 While the papacy of John Paul I spanned a brief period of time, the man was far from unremarkable beyond serving as the leader of the Catholic Church. This article intends to highlight the life and distinguishing characteristics of this particular pope whom many referred to as “The Smiling Pope.” Rather than be crowned like every pope before him, John Paul I opted to cover his head with the pallium of an archbishop.

Pope John Paul I, then known as Albino, came from a poor family. His father was a bricklayer and he had three siblings: Federico, Edoardo and Antonia. Albino’s first interest in God and the divine came at the age of 10, directly after a Capuchin monk visited his hometown in order to deliver Lenten sermons. One year later, in 1923, after seeking his father’s blessing to pursue the priesthood, Albino would enroll in Feltre’s minor seminary, where he quickly developed a reputation for being over-enthusiastic in his studies. His father, Giovanni, told young Albino that he hoped Albino would grow into a priest that cares for workers, much like how Jesus would.

From Priest to Vicar General.

In 1935, 12 years into his tenure with the Catholic church, Albino would finally receive his ordination into the priesthood. Two years after that, he would teach canon law, dogmatic theology, moral theology and religious art as a professor at Belluno’s seminary. 1947 saw him receive his doctorate in Sacred Theology with a thesis critiquing the teachings of Antonio Rosmini; that year also saw him promoted to the position of chancellor. 1954 saw him rise to the position of vicar general for the Belluno region.

Despite receiving multiple nominations to promote him to bishop, Albino would not accept the position until 1958. That year, Pope John XXII would appoint him to serve the diocese of Vittorio Veneto. Upon his appointment, Albino admitted that he wanted to be known as a teacher and servant in deference to his motto of Humanitas, meaning “humility.”

Thoughts on Being Pope.

When the papal conclave convened to decide upon the Pope Paul VI’s successor, Albino was ready to decline being chosen. However, when upon learning that he had been chosen despite his misgivings, he embraced the selection and proclaimed himself “Pope John Paul I,” sovereign of the Catholic faith out of a sense of obligation.

In his time serving as pope, John Paul I sought to renew the church according to the Second Vatican Council; revise canon law; keep the faith invested in evangelism; promote unity within the church in the face of doctrine; maintain an open dialogue with others and promote global peace and unity. John Paul I was the first pope to speak as one individual, rather than prior popes’ habit of referring to themselves as “we.” John Paul I was the last pope to make use of the sedia gestatoria, a throne that allowed church subordinates to carry the pope throughout public spaces; it has since been replaced with the Popemobile, a vehicle equipped with bulletproof glass windows.

Pope John Paul I’s character was one of warmth, as can be attested to with his nickname of “The Smiling Pipe,” and intelligence. He wrote letters to several famous individuals like Mark Twain and Charles Dickens, and they often returned the favor. He would also write letters to Biblical entities as an exercise in contemplation.

Interesting Facts About this Pope.