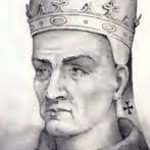 Pope John VI led the Church for more than three years. His papacy was the first of the 8th century. He was the 85th Pope to hold the position. Despite his short tenure, the Pope accomplished a lot. His reign came at a rough time for Italy. Marred by war and changing politics, John VI was able to make lasting changes that improved Italy for years to come.

John VI was a Greek who was born in Ephesus. Not much is known about his early years. It’s thought that he spent most of his youth and education on the Coast of Ionia.

Prior to becoming pope, John VI held onto the position of Deacon. He was appointed during the turn of the century in the year 700. In the very same year, he elevated to the position of cardinal. Just a year later, he was elected as the 85th pope.

Pope John VI succeeded Pope Sergius I. During his time as Pope, John VI accomplished a lot in the realm of military operations and politics.

The first notable event happened when the Byzantine commander Theophylactus invaded the Italian mainland from Sicily. Pope John VI immediately intervened, forbidding him from using violence against the Romans.

Interestingly enough, this intervention proved beneficial for Theophylactus. Romans did not react well to his invasion. Pope John VI prevented him from being injured, which ultimately stopped wide-spread violence and destruction in Rome.

Another historic event happened when Lombard Duke Gisulf of Benevento crossed into Roman territory. Pope John VI persuaded Gisulf to withdraw his forces and return home. At the sight of Romans suffering, the Pope sent priests to the Lombard camp. There, they offered ransom so that Gisulf would let his Roman captives go.