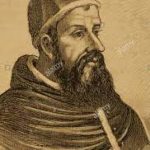 Pope John VII was the 86th Pope of the Catholic Church. His papacy marked a notable shift in papal relations. He had a good relationship with the Lombards. However, his relationship with Emperor Justinian II was a bit rockier. This lead to some tension between the Church and Byzantium.

John VII was born in Calabria, located on the southern tip of Italy. He was of Greek ethnicity and became one of the Byzantine Popes to rule during the later 7th and early 8th centuries.

Born to father Plato and mother Blatta, John VII was a well-rounded and educated man. His father was the official curator of Palatine Hill. He worked for the Byzantine Emperor, making his son one of the first popes born to a Byzantine official.

Prior to becoming pope, John VI held onto the position of Deacon. He was appointed during the turn of the century in the year 700. In the very same year, he elevated to the position of cardinal. Just a year later, he was elected as the 85th pope.

After his election in 705, Pope John VII had many political rivals to contend with. At the time, three powers were vying for control over Italy. This included the Church, the Lombards, and the Byzantines. The Lombards held the most control over Italy at the time. Meanwhile, the Byzantines were arguing over who was emperor. The exarch of Ravenna was sent by the Emperor Justinian II to represent the empire in Italy.

Pope John VII developed a healthy relationship with the Lombards. This resulted in the Lombards releasing the Southwestern region of Italy. Unfortunately, this event sacrificed papal relations with the empire.

Sour relations came to a head over the Quinisext Council. Pope John VII refused to ratify the council’s canons. According to records, the canons were deeply unpopular throughout Italy. He sent them back unsigned, further agitating relations with Byzantine.