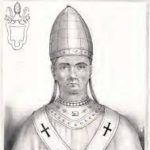 The 122nd pope, Pope John X, held the position for over 14 years. During that time, he managed to accomplish a lot in terms of politics. He is most known for attempting to unify Italy. He also finally defeated the Saracens, which threatened the papacy for many generations.

John X was born in Tossinano, a commune in the Bologna region of Italy. Not much is known about his early life prior to joining the Church. His father was also named John. The future pope is thought to have joined the Church early on, which would explain his influence.

John X’s career with the Church started when he was made deacon by Peter IV, who was the bishop of Bologna. He was originally planning to succeed Peter IV. However, the position of archbishop of Ravenna became available.

So, he traveled to Ravenna and was consecrated in this position by Pope Sergius II. He held this position for eight years before becoming pope.

After the death of Pope Lando, he was elected to the papacy. His first course of action was addressing the Saracens. The Saracens had made an outpost on the Garigliano River in central Italy. He immediately formed an alliance with Prince Landulph of Beneventum, Berengarius of Friuli, and other rulers.

The Pope led his large army to the mouth of the Garigliano River. The Battle of Garigliano lasted for about three months. By the end of it, all Saracens were caught and killed.

After this battle, Pope John X crowned King Berengar as the Holy Roman Emperor. Unfortunately, Berengar had a lot of enemies. Pope John X’s endorsement of the King put him at risk. Berengar was eventually assassinated. While Pope John X tried to distance himself from Roman Nobles, he enraged Marozia. As a powerful Roman senator, she had John X imprisoned.