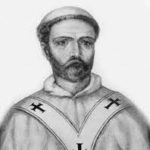 Pope John XI was the 125th pope of the Catholic Church. He reigned during a tumultuous time for the Church. The papacy did not have much control over Rome. It was influenced by aristocrats. Pope John XI was, perhaps, one of the best examples of noble influence over the papacy.

John XI was born to a very noble family. His mother was Marozia. She was a powerful Roman senator who had Pope John X imprisoned. John XI’s father was reported to be Alberic I of Spoleto. Though, many accounts say that his actual father was Marozia’s lover, Pope Sergius III.

Before his papacy, he didn’t have much experience with the church. Marozia used her political influence to get John XI consecrated at a very young age. He was only 21 years old at the time.

Pope John XI’s inexperience with the Church did not matter. His mother was the de facto leader of Rome at the time of John XI’s consecration. As a result, he did her bidding.

He continued to serve her political needs until she was overthrown. This happened sometime in the middle of John XI’s papacy. Marozia was overthrown by her own son, Pope John XI’s half brother Alberic II.

Even after Marozia’s reign, Pope John XI had to serve the new self-declared ruler of Rome. Alberic II was considered tyrannical. He took over almost all of the papal duties. The only thing John XI could do was his spiritual duties. Alberic II took over both secular and ecclesiastical affairs.

Alberic II confined Pope John XI to the Lateran. He was not allowed to leave, making him a prisoner. He eventually died at the Lateran, ending his papacy.