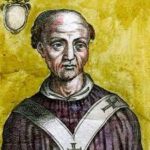 Pope John XII is one of the more controversial popes in history. He served as the 130th pope. However, his reign is marked with controversy. Considered an immoral man with not much interest in ecclesiastical affairs, his actions were not favored by historians or his successors.

John XII was born as Ottaviano in Rome. He was the only child of Alberic II of Spoleto. Alberic II was the ruler of Rome who had deposed his own mother and imprisoned his half brother, former Pope John XI.

Like John XI, Pope John XII belonged to a very influential family. He served during a time when the papacy had very little control over Rome. It was heavily influenced by the Counts of Tusculum, which Pope John XII was a part of.

Prior to his papacy, Ottaviano did have some experience with the Church. He was already part of the Church when his father died. Alberic II made an oath to Roman nobles that Ottaviano would fill the next papal vacancy.

The following year, Ottaviano elevated to the cardinal deacon of Santa Maria in Domnica. Shortly thereafter, he was elected pope.

With his consecration, he adopted the John XII moniker. However, he still used his birth name for secular affairs.

The Pope had difficulties controlling and influencing Roman nobles as his father had. He attempted to attack the Lombards. While the attack did not succeed, he was able to negotiate with Gilduf I.

That success was short-lived. Areas around Rome were attacked by King Bernegar II of Italy. In an attempt to defend Rome against these attacks, Pope John XII sent legates to Otto I of Germany. Otto came to Rome and swore to protect the Pope.

Again, that relationship was short-lived. Pope John XII crowned Otto I as emperor. As emperor, Otto ordered Pope John XII to take an oath of obedience. In retaliation, the Pope conspired against the emperor. He was replaced, but the new Pope was deposed in only a few months.

The conflict between Pope John XII and Otto I was never settled before his death.