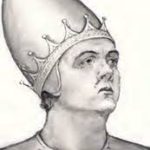 A pious and educated man, Pope John XIII is remembered favorably throughout history. He served as the 133rd pope. His tenure as pope was quite dramatic. He had a lot of opposers during his early years. However, he was able to accomplish many things politically that helped to improve the papal’s territorial claims in Italy.

John XIII was born in Rome around 930. There is still some confusion about his family and upbringing. It has been established that his father, John, was a bishop. Though, some accounts say that he was part of the Cresentii family, which held a lot of political influence in Italy. If that were true, then it would mean that his father was previously a Duke.

Whatever the case may be, John XIII grew up with a lot of privilege. He was raised at the Lateran Palace.

Before becoming pope, John XIII was heavily involved with the Church. He was a member of the schola cantorum, which was an esteemed papal choir. John XIII also served as a reader, an exorcist, and an Acolyte. Eventually, he elevated to subdeacon and deacon.

Even after leaving schola, he was an active part of the papal administration. He served former popes in the Chancery of Apostolic Briefs. He was also a librarian and bishop of Narni.

John XIII’s election was a controversial one. After the death of his predecessor, Pope Leo VIII, Roman nobles requested that Pope Benedict VI be reinstated. However, Holy Roman Emperor Otto I refused. Instead, he went with Pope John XIII, who was very supportive of Otto’s ecclesiastical and political views.

This angered the Roman nobles. So, they formed a rebellion. Roman military captured the Pope and imprisoned him at Castel Sant’Angelo. The Pope managed to escape and flee to Capua for protection under Pandulf Ironhead.

In the meantime, Otto came to Rome and took care of the opposition.

Pope John XIII then returned to Rome. The rest of his tenure was quite successful and peaceful. He arranged a marriage between Otto’s son, Otto II, and the Byzantine princess, Theophano.

-The first recorded blessing with church bells started with the death of Pope John XIII
-He had the nickname “White Hen” due to the light color of his hair.
-According to legend, Pope John XIII performed a successful exorcism on a noble by using the real chain of Saint Peter. Legend says that the chain causes thick smoke to emanated from the nobleman’s body as the evil spirit left.
-Pope John XIII was responsible for restoring a considerable amount of papal territory.
-The Pope arranged a marriage that helped to solidify Otto’s claim as emperor.
-After his death, he was chronicled as Pope John XIII “The Good.”