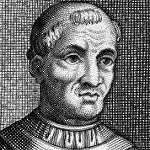 Pope John XV was the 137th man to hold the powerful position of leader of the Catholic Church. His pontification lasted for more than a decade. It came at a particularly dark time for the papacy. The Pope’s reputation didn’t do much to help.

There aren’t too many historical records of Pope John XV’s early life. He was born sometime around 950. He was born in Rome. His father, Leo, was a Roman presbyter.

John XV became pope on August 20th, 985. He was only 35 years old at the time. His predecessors, Pope Benedict VI and Pope John XIV were both murdered by Antipope Boniface VII.

Crescentius II, a patrician of Rome, worked hard to get John XV elected. Crescentius II is part of the Crescentii family, which supported the Antipope. This support harmed the family’s political influence. But, the election of John XV helped to restore it.

Unfortunately, Crescentius II dominated the Pope’s reign. He was a greedy man and used nepotism to install bishops. This resulted in the Investiture Controversy. The Pope was lumped into this controversy as well, affecting his reputation.

Luckily, the wife of Holy Roman Emperor Otto II intervened. She hampered Crescentius II’s ambitions, restoring some respect to the papacy. Eventually, Pope John XV appealed to Otto II against Crescentius. But, he died of fever before Otto II could take action.

The most significant accomplishment of John XV is his canonization of Bishop St. Ulrich of Augsburg. He was the first pope to canonize a saint.