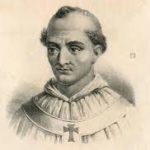 As the 141th leader of the Church, Pope John XVIII had very little power over Rome. Like Pope John XVII before him, John XVIII was merely a puppet for powerful Romans. He did, however, focus on ecclesiastical duties and was able to accomplish a bit more than his predecessor.

He joined the church and quickly climbed the ranks. There, he attracted the attention of Crescentius III.

John XVIII became pope in January of 1004. He owed this election to the influence of the Crescentii family. More importantly, he owned it to Crescentius III.

The Crescentii family had a stronghold over Rome for several generations. They were in battle with the Holy Roman Emperor, Henry II. Crescentius chose the previous pope and used him as a puppet. The same thing happened with John XVIII.

However, unlike his predecessor, John XVIII was a bit more strong-willed. He handled ecclesiastical duties, including the creation of new dioceses and adjudicating bishops of Sens and Orleans.

Eventually, Pope John XVIII stepped down from his role. It’s not sure why. He could have been in poor health or was simply tired of playing puppet to Crescentius. He immediately moved to the monastery of St. Pete, where he died.

-Like his predecessor before him, Pope John XVIII had little control as Pope.
-He held the position of Pope during a time when there John Crescentius and Emperor Henry II were fighting for control of Rome.
-There are no records as to why Pope John XVIII abdicated his role.
-During his tenure, the Pope authorized a new Dioceses for missionary activity among Slavs.
-Pope John XVIII was able to create some temporary peace between the Western and Eastern churches.