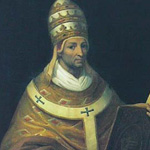 Considered an incompetent pope, Pope John XIX’s reign is one that’s marked with controversy. He was the 144th man to lead the Church. However, he was never a part of the church beforehand. He was elected after the death of his predecessor, who happened to be his brother.

Before becoming Pope John XIX, he was known as Romanus. He is one of three sons of Gregory I. His father was the Count of Tusculum, making Romanus a part of the notorious Tusculani family.

This family took over as the rulers of Rome after the fall of the Crescentii family.

Romanus did not work for the Church in any capacity. He wasn’t an ordained priest at all. Instead, he was a consul and senator.

When Benedict VIII died, Romanus was elected to take over the papacy. He then took the name John XIX. His election was controversial because John XIX had no experience with the Church prior to his election. To overcome this, he was immediately ordained in all orders. He was accused of using bribery to get the election.

His reputation as pope was not a good one. Many believed he was greedy and immoral. His reliability was also questioned.

This all came to a head with this recognition of the patriarch of Constantinople. He was allegedly paid to recognize the patriarch. Roman outcry forced him to withdraw that recognition.