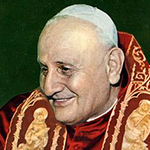 Pope John XXIII was the 261st leader of the Catholic Church and the 23rd pope to take the name of John. This article intends to flesh out the man, addressing his life prior to the papacy and any highlights or major accomplishments during his papacy.

Angelo Roncalli was the fourth of Giovanni Roncalli and Marianna Mazzolla’s 13 children and also their eldest son. Like most people living in the village of Sotto il Monte, his family earned a living as sharecroppers. While Angelo was technically of Italian nobility, it came from a poor secondary branch. Roncalli received First Communion and his Confirmation in 1889, at age 8.

Time with the Church.

Roncalli enrolled into the Secular Franciscan order on March 1st, 1896, later becoming a full member on May 23rd, 1897. Roncalli finished his doctorate in Canon Law in 1904, becoming ordained on August 10th of that year. 1905 would see Roncalli become secretary to Bishop Radini-Tedeschi of Bergamo, a position he would maintain until Radini-Tedeschi’s death on Auguust 22nd, 1914. Radini-Tedeschi’s final words to his loyal secretary were that he should pray for peace.

Roncalli was drafted into the position of sergeant for the Royal Italian Army, specifically serving within the medical corps as chaplain and stretcher-bearer. Upon his 1919 discharge, Roncalli was declared spiritual director of the seminary.

After World War I.

After meeting with Pope Benedict XV on November 6th, 1921, Roncalli was inducted into the Society for the Propagation of the Faith as its Italian president. In 1925, Roncalli was appointed the Apostolic Visitor to Bulgaria and also Archibishop of Areopolis. November 30th, 1934 would see him become the Apostolic Delegate to Turkey and Greece, as well as the Archibisop of Mesembria, Bulgaria. Roncalli would use his influence to save thousands of refugee Jews throughout Europe.

Roncalli remained in Bulgaria at the time that World War II commenced, optimistically writing in his journal in April 1939, “I don’t believe we will have a war”. At the time that the war did in fact commence, he was in Rome, meeting with Pope Pius XII on 5 September 1939. In 1940, Roncalli was asked by the Vatican to devote more of his time to Greece; therefore, he made several visits there in January and May that year.

December 22nd, 1944 would see Roncalli’s appointment to Apostolic Nuncia of France. This required him to negotiate retirement for several bishops whom had collaborated with the Nazis. In this new role, he used his influence to help anyone, mostly Jewish, fleeing from the Holocaust. This included delivering immigration certificates to Palestine, producing certificates indicating “baptisms of convenience” and freeing the captives of the Jasenovac and Sered concentration camps, among many other acts.

January 12, 1953 would see Roncalli’s appointment to Venetian Patriarch and Santa Prisca’s Cardinal-Priest. Vincent Auriol, the President of France, awarded him Commander of the Legion of Honour.

Although aware he was a candidate, Roncalli had a return train ticket on his person during the Papal Conclave of 1958-he did not believe he would be chosen. Upon becoming Pope, he was slightly embarrassed at how none of the prepared cassocks suited his 5’2″, 200 pound frame, remarking that he would look horrible on television. He described his first international appearance as “a newborn draped in swaddling clothes.”

One of his first acts was to edit the description of Jews in the Good Friday liturgy; previously, this sermon would describe them as “perfidius,” meaning faithless, and call for their conversion to Catholicism. During confession, he, speaking for the Church, had committed sinful antisemitism for many centuries. During Vatican II, he gave Cardinal Augustin Bea the task of drafting documents engineered toward reconciliation between the Church and the Jewish people.

He believed that the relevance of birth control should be investigated, that divorce flew in the face of church doctrine due to life coming from families, that God is the sole entity able to separate a family and that human rights, even among the elderly and newborn, were universal.

He beatified four people and canonized ten other individuals between the years of 1959 and 1963. He also declared St. Lawrence of Bindisi as “Doctor of the Church” in 1959.