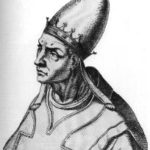 Pope Leo VIII served as a Roman prelate before claiming the office of the papacy from 963 until 964 as a rival pope to both Popes John XII and Benedict V. His second term as pope from June 23 of 964 lasted until his death. Today the Catholic Church regards his first time in the office as illegal, labeling him an antipope. His second reign is considered to be legitimate, making him an actual pope. As an appointee of the then-Holy Roman Emperor Otto I of Germany, Leo VIII served in the office of the papacy during a chaotic time called the Saeculum obscurum.

Leo was born in Rome in an area near the Clivus Argentarius. His father John held the office of protonotary and came from an important noble family. While Leo was only a layperson, he occupied the office of superintendent of Roman public schools teaching scribes under John XII’s papacy.

Pope John chose Leo to go as part of a papal representation to the recently crowned Otto I the Holy Roman Emperor. At the time, Otto was in Italy conducting a siege in Umbria. John had given Leo directions to convince the emperor that the pope would address abuses going on in the papal court and to protest the emperor’s insistence on requiring Papal State cities to demand direct oaths of fealty. The practice had been for those cities to swear allegiance directly to the pope.

In 963 A.D. Otto I marched upon the city of Rome and organized a synod in the city that met to depose and expel Pope John XII from the papacy due to charges of dishonorable behavior. He was accused of sponsoring an armed insurrection against Otto the Great, the Holy Roman Emperor. The emperor pushed for Leo to be elected as new pope, though he only served as a layman at the time. Pope John wisely fled to Tibur, and Leo assumed the role of the papacy on December 4, 963 A.D. as the nominee of Otto the Great.

After Otto left Rome around January 12, 964 A.D. the deposed John and his supporters suddenly reappeared in Rome. The next month, John held a church synod and deposed Pope Leo. Leo VIII had no choice but to flee for his life back to his patron Emperor Otto in Germany in February of 964 A.D.

In May, the restored Pope John died unexpectedly, leaving the pontificate suddenly vacant. Emperor Otto intended Leo VIII to fill it again, but he Romans chose another candidate Benedict V instead.

The Second Papacy of Pope Leo VIII and His Acts

Emperor Otto became enraged and marched on Rome once again at the Roman decision to elect Benedict. With the Holy Roman Emperor’s strength of arms he forced the church to accept Leo back as pope in June of 964 A.D. The emperor deported the unfortunate Benedict, leaving Leo VIII free to conduct the remainder of his papacy unopposed.

Leo VIII went on to issue many papal bulls. A great number of them had to do with giving privileges to the Holy Roman Emperor Otto I and his heirs in perpetuity. The emperors claimed that these bulls gave them the right to select the new rulers throughout the Kingdom of Italy as well as the right to nominate popes, bishops, and archbishops for their offices. Allegedly Leo also gave up all of the papal rights to the Papal States that prior Emperors Charlemagne and Pepin the Short had bequeathed to the papacy.

The legality of the election of Pope Leo VIII to the papacy has been questioned and debated for hundreds of years.

Pope Leo VIII held the office of the papacy two times, once as antipope and the second time as an unopposed pontiff.

Leo served for no more than two years in the papal office during a chaotic period in the Catholic Church.