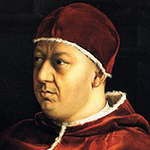 Pope Leo X was the 217th leader of the Catholic Church and the 10th among that lot to take the name “Leo.” This article seeks to distinguish him from his many papal forebears and successors by focusing on specifics and details of his life and papacy.

Giovanni was the second son of Lorenzo the Magnificent, leader of the Florentine Republic. He was born with the path of the clergy already set before him. His father managed to convince Innocent VIII, a relative, to make Giovanni Cardinal-Deacon of Santa Maria in Domnica when he was only 13 years old; Giovanni would not wear any clerical insignia nor participate in college deliberations until he turned 16. He received education in humanities by Lorenzeo’s court of influence, then moved on to studying for degrees in theology and canon law from 1489 to 1491.

March 1492 would see him formally join the Sacred College of Cardinals. It was not long after this time that he would join in the papal conclave of 1492 to choose Innocent VIII‘s papal successor, but not before his father’s died. During the French invasion by King Charles VIII, Giovanni fled Florence for Germany, the Netherlands and even France while his brother Piero went further into Venice and Urbino. Giovanni would not return to Rome until May of 1500, where Pope Alexander VI would greet him and he would call a home full of artwork and literature.

After Julius II donned the papal crown in 1503, Giovanni was happy for the man; his brother’s death in the same year left Giovanni as head of the de’ Medici clan. On October 1st, 1511, Giovanni became the papal legate for Bologna and the Romagna. When the Florentines favored the Pisans, Julius II dispatched Giovanni with the papal army to fight the French; this ended with a French victory and Giovanni being held captive for years. In time, Giovanni’s younger brother, Giuliano, became head of Florence while Giovanni governed the region.