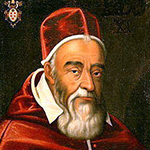 Leo XI was born Alessandro Ottaviano de’ Medici as a scion of the famous Medici family of Florence. Before becoming Pope Leo XI, he served as bishop of Pistoia, archbishop of Florence, and finally cardinal. Leo was elected and succeeded his predecessor Pope Clement VIII on the first of April in 1605. Pope Leo XI died the same month, becoming the man to hold the papacy for the shortest time ever.

Leo XI Before Becoming the Pontiff

Leo was born with the given name of Alessandro Medici to a father Francesca Salviati and mother Ottaviano. His great uncle was the Pope Leo X. The father of Allesanndro died while he was still a child. Allesanndro received a home schooling education from the Dominican father, Priest Vincenzo Ercolano.

Alessandro felt a calling to join the priesthood at a young age, but Ottaviano his mother stood in his way because he was the one male heir to the family name. She instead dispatched him to the Grand Duke of Tuscany to be a part of his court in an effort to change her son’s mind about the priesthood. The Grand Duke made him a knight of San Stefano and attempted to persuade Alessandro to live a secular life, but after his mom died there was no one to stop him from becoming ordained as a priest in the year 1567 A.D.

During Alessandro’s career in the church, he held a range of positions. He became Bishop of Pistoia and then later Archbishop of Florence in the year 1574 A.D. At one point Alessandro served the church as the ambassador from Florence to the pope. In 1583, Alessandro attained the rank of cardinal. The then-Pope Sixtus V appointed him as the Cardinal Priest of Santi Quirico e Giulitta on January 9, 1584 A.D.

Alessandro also served as the papal representative (legate) to France, and he was the Congregation of the Bishops and Religious’ Cardinal Prefect. The man who would become Pope Leo XI had a close friend and confidante in St. Philip Neri who adopted him like a spiritual mentor. While Leo served as the Tuscan ambassador to Pius V Philip’s court, Neri made a prediction that Alessandro would become the pope.

Eleven days after Pope Clement VIII died the College of Cardinals went into the conclave on March 14, 1605 A.D. The 62 cardinals chose Alessandro over rival candidates including a famous historian and Jesuit who would one day become Saint Robert Bellarmine. The election of Leo XI went against the specific wishes of Spain’s powerful King Philip III. Rumor has it that the French King Henry IV had spent 300,000 ecus to encourage the election of Leo.

Leo XI became the pope on April 1, 1605, taking this name in honor of his uncle the former Pope Leo X. The Cardinal Francesco Sforza crowned him, and Leo assumed control of the Basilica of Saint John Lateran on April 17, 1605 A.D. He died 10 days later, having served the church for a mere 27 days in total.

How he died
Pope Leo XI died on April 27, 1605 A.D. in the city of Rome at the age of 69. He died in tragic circumstances as he suffered from the cold and fatigue at the April 17th ceremony that invested him in the Basilica of St. John Lateran. Leo XI experienced a fever the next day and died less than 10 days later.

Leo XI served as ambassador from his home town of Florence to the pope.

Saint Philip Neri was the spiritual mentor to Leo XI who predicted his ascension to the papacy.

Leo’s papacy remains the shortest in Catholic Church history at only 27 days total.