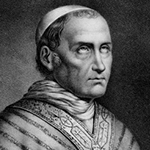 Leo XII was the 252nd man to serve as the leader of the Catholic Church and the 12th to assume the papal name of Leo. This article intends to flesh this individual out beyond dry statistics so that he is easier to remember and learn about. Included below are summaries of various points in his life, lasting and notable elements of his papacy, a stat card and a handful of interesting tidbits.

Della Genga majored in Theology at Osimo’s Collegio Campana from 1773 until 1778, then continued his education at Rome’s Collegio Piceno and the Pontifical Academy of Ecclesiastical Nobles. His became a subdeacon in 1782, then a deacon and finally full ordination was ordained on June 14th, 1783. Cardinal Marcantonio Colonna personally oversaw della Genga’s elevation to the last two ranks.

As a fully ordained priest, della Genga’s first work was ambassadorial work with Switzerland. His noble bearing and fluidity of language allowed him to tactfully handle a commemorative ceremony of Emperor Joseph II. 1793 would see him declare Archbishop of Tyre by Pope Pius VI. Della Genga was consecrated the following year and sent to serve Switzerland as its Apostolic Nuncio, complete with a transfer of office to Colonge, where he lived in Augsburg. Della Genga believed this would be his final post within the church and saw to the construction of a pair of tombs, one for his mother and the second for himself.

In the time spent serving the German people and German-speaking Swiss, he saw to several trying missions that brought him into regular contact with the politics of Dresden, Munich, Napoleonic France, Vienna and Wurttemberg. It is regarded that this is period of time is where much of his noble coffers were expended; suspicions arose that he had sired three children with a Swiss Guardsman’s wife.

Once Napoleon I abolished the Papal States in 1798, della Genga spent his time in Monticelli’s abbey, doing his best to enjoy his hobbies. 16 years later, della Genga would be chosen as Pope Pius VII’s messenger to France’s King Louis XVIII. Della genga was to pass on a message of congratulations to the French King for signing the Treaty of Paris that restored much of France during the Bourbon Restoration.

Cardinal della Genga and Beyond.

On March 8th, 1816, della Genga became Cardinal-Priest of Santa Maria, receiving his red zucchetto three days later and his church on April 29th of the same year. Soon after, he would be elevated to Archpriest of the Basilica di Santa Maria Maggiore. While he was appointed to Sinigaglia’s episcopal see, he resigned from the position in 1818 due to health concerns and without having even entered the archdiocese. On may 9th of 1820, Pope Pius VII elevated della Genga to Vicar General of His Holiness for the Roman diocese.

Pope Leo XII was a hardly conservative Pope who had an uncompromising perspective on the direction of the Church and of society. While many believed he fully believed what he said, the results of his actions and policies plus the finances of the Church during his papacy, paint an unpleasant picture of the man.