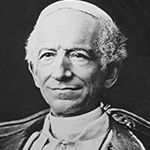 Leo XIII was the 256th man to serve as the leader of the Catholic Church and the 13th to assume the papal name of Leo. This article intends to breathe some life in his history in order to make it easier to recall and study. Here you will find summaries of various points in his life, lasting and notable elements of his time with the church and as the Pope, some statistics and a handful of interesting tidbits.
Pope Leo XIII was one of the more famous popes in modern history. He is remembered for his efforts to reconcile Catholic Church teaching with modern ideas as well as for his intellectualism.
In a famous 1891 encyclical Rerum novarum document, the pope outlined ideas for workers’ rights that included safe working conditions, fair wages, and trade union formation all the while reaffirming the rights that included free enterprise economics and property rights. He walked the middle ground by being opposed to both unbridled free market capitalism and socialism. Pope Leo XIII also heavily promoted the use of the rosary and scapular.

Vincenzo Pecci was born the sixth of Count Ludovico Pecci and Anna Buzzi’s seven sons. Vincenzo stayed with his family until 1818 when both he and Giuseppe, his brother, went to be educated in the Jesuit College of Viterbo. Vincenzo stayed at the institution for six years, gaining enough appreciation for the Latin language that he would write poetry. 1824 saw Vincenzo and Giuseppe recalled to Rome to visit their dying mother. Count Pecci wished for his sons to be close to him as he mourned, leaving Vincenzo and Giuseppe to continue their education at the Jesuit Collegium Romanum.

Once Vincenzo reached the age of 18, he decided to pursue secular clergy, diverging from his brother’s path as a Jesuit monk. Vincenzo enrolled into the Academia dei Nobili in order to focus on diplomacy and law. Six years later, he gave a presentation on papal judgments, with several cardinals in attendance. This presentation earned him several awards and the notice of the Vatican.

As Rome was dealing with an outbreak of cholera, Vincenzo helped Cardinal Sala manage the city’s many hospitals. Vincenzo would receive his doctorates in theology, civil law and Canon Law in 1836.

Pope Gregory XVI made Vincenzo his personal prelate on Valentine’s Day, 1837; he would not become an ordained priest until the end of that year. His first mass was celebrated alongside Giuseppe. Some time later, the pope appointed Vincenzo Legate of Benevento, a papal province comprising some 20,000 people. During his tenure as legate, Vincenzo saw to the arrests of corrupt aristocrats to restore order. He also reformed local taxes to bolster trade with Benevento’s neighboring provinces and revitalize its decrepit economy. As reward for his efforts, Vincenzo was relocated to larger provinces like Spoleto and Perugia.

In 1843, Vincenzo was appointed Belgium’s Apostolic Nuncio. April 27th of that year would see the pope promote him to Archbishop. A year later, a Belgian College was opened within Rome; Vincenzo would spend some time mediating in the emerging debate between Catholics and Liberals. Vincenzo wished for the Catholics to succeed but also wanted to win opinion of King Leopold I and queen Louise, both nobles with staunchly Liberal viewpoints. In time, Vincenzo united Catholics and Leopold I gave him the title of Grand Cordon within the Order of Leopold.

During his time as archbishop, Vincenzo did his best to improve the quality of life within his dioceses.

December 19th, 1853 would see him rise to the ran of Cardinal. Due to rampant earthquakes and flooding, “Archbishop Pecci” donated all of the festivities from his ceremony to the victims. This also served as the moment that public interest between the Papal States and Italian nationalism spiked, seeking to demolish the Papal States in favor of a united Italy. Pecci was loyal to the church and reasonably protested against the Italians. When the Italian state overtook Catholic schools, Pecci responded by added secular topics to the curriculum and opening seminaries to non-theologians.

When Pecci was elected to be pope by the College of Cardinals, he took the name of Pope Leo XIII. His papacy was most notable for the tireless efforts Leo made to bridge the gap between the thinking of the modern world and the Catholic Church. This included his reassertion that religion and science could exist in harmony. Pope Leo XIII insisted on churchmen studying Thomas Aquinas and also decided to make the Vatican’s Secret Archives available to qualified researchers. Leo also re-founded the Vatican’s Observatory as part of his devoted efforts to bring Catholic Church thinking into the 20th century.

Among his other notable achievements, Pope Leo XIII maintained foreign relations with countries including Russia, Germany, France, Italy, the United States, Great Britain, and Brazil and positively engaged the long-estranged Eastern Orthodox Churches in a number of their core countries. Perhaps most importantly, Pope Leo XIII restored stability to a church that had been rocked by the chaotic years under his predecessor Pope Pius IX.