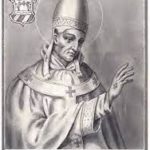 Very little is known about Liberius, the man, except that he was a Roman deacon before his consecration as Pope. When Liberius was chosen to succeed Pope Julius I on May 17, 352, he was thrown into the middle of a controversy that would send him to prison. He was dropped into the Arianism dispute. Arius, a priest in Alexandria, Egypt around 320, came up with a variation on the doctrine of the Trinity. He said that Jesus Christ, as the Son of God, was separate from God. The Catholic Church has always held that the Trinity of Father, Son, and Holy Ghost were one with no separation.

Unfortunately, when Liberius came to the Papal seat, Emperor Constantius II was the ruler of Rome. Constantius was a follower of Arius. The Emperor tried to persuade the new Pope to accept Arianism, but Liberius refused. The Bishop of Alexandria, Egypt was extremely anti-Arian and the Emperor wanted Liberius to excommunicate the Bishop. The Emperor had the Pope kidnapped and brought to the Imperial Court. Yet even when Constantius threatened to imprison him, Liberius refused.

In 355, Liberius was sent into exile in Thrace in the north of Greece. He was imprisoned for two years. During this time, Constantius supposedly had letters forged in Liberius’ handwriting, excommunicating the Egyptian bishop. This apparent weakness on the part of the pope is probably the reason he was never canonized as a saint. Meanwhile, the Emperor raised Felix II to be the Bishop of Rome.

The people of Rome became very agitated with this antipope and demanded that Constantius bring back the true pope, Liberius. The Emperor relented and Liberius returned. Felix II was supposed to rule equally with Liberius but fled to the countryside when Liberius was reinstalled.

Pope Liberius was either one of the strongest, bravest popes, or he was one of the weakest. It all depends on whether you believe that the letters that came out of Thrace were real or forgeries. Liberius apparently never discussed them. After Constantius II died in 361, Liberius reversed all the Arian doctrine and pulled the Church back into orthodoxy.