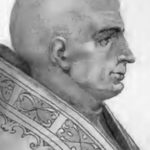 Pope Lucius II was the 166th pope. His reign that lasted 340 days was a very tumultuous one. It is unknown exactly when he was born, but he died on February 15, 1145, shortly after being hit by a thrown stone during a battle.

Pope Lucius II was born in Bologna, Italy. Until he chose the name Pope Lucius, he was called Gherardo Caccianemici dal Orso. He served for many years as a canon at the Basilica di San Frediano in Lucca, Italy, before being appointed as a cardinal priest at Santa Croce in Gerusalemme in Rome.

Pope Honorius II, who appointed Lucius II a cardinal priest, also appointed him as the Roman Diocese’s librarian. This appointment gave him the power to take care of many critical documents.

In 1125, Gherardo Caccianemici dal Orso became the papal legate to Germany. He was appointed to this influential role by Pope Honorius II to make decisions affecting the church’s relationship with the German government. He supported Holy Roman Emperor Lothair III while in Germany. Another critical step that he took was to appoint Saint Norbert of Xanten as the Archbishop of Magdeburg.

In 1128, Gherardo Caccianemici dal Orso. Was sent to Benevento, in Southern Italy, to serve as its ruler. The area had been given to Pope Leo IX by Emperor Henry III when the pope promised to create the Dioceses of Bamberg.

Pope Innocent II ordered Gherardo Caccianemici dal Orso to return to Germany as the papal legate in 1130. During his second time in Germany, he was responsible for convincing Lothair III to pay for two trips to Italy to protect Pope Innocent II’s reign. He worked alongside Lothair III to persuade the monks of Monte Cassino to submit to papal rule.

Pope Innocent II valued Gherardo Caccianemici dal Orso’s hard work in Germany greatly. As a reward, he made him a Papal Chancellor. This role was one of the most powerful positions in the church because the chancellors were responsible for determining what the pope would hear.

During his papacy, Lucius II gave a gold-plated copy of the Gospels adorned with jewels and an altar-cover and two silver-gilt ampullae to Santa Croce in Gerusalemme.

Pope Lucius II time as pope was a troubled one. Despite being a godparent to one of King Roger II of Sicily’s children, the king demanded that the papacy return part of the land controlled by the papacy to him. A conflict broke out when the pope refused. In the end, the pope lost control of the area.

The scrimmage with King Roger II gave Roman aristocrats the courage to ask for their land to no longer be under papal control. In the ensuing conflict, the pope was hit in the head with a stone. Despite living for several days, he finally died from the injury.