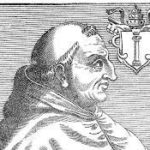 Pope Marinus II was the 128th pope, serving under the saeculum obscurum. Sometimes incorrectly named ‘Martinus, his real surname refers to the sea. The many exciting and insightful facts about Pope Marinus II’s life and legacy will be explored in this article.

Meaning the Dark Ages in Latin, the saeculum obscurum lasted from 904 to 964. Though there is a great deal of speculation about its origins, these Papal Dark Ages were marked by political manipulation of the Church by the Theyophylacti family in Rome. Pope Marinus II was the tenth of twelve popes to serve during this time. His papacy began with approval from Alberic II, the then ruler of Rome, and the son of Marozia Theyophylacti.

One of Pope Marinus II’s more notable appointments concerns Archbishop Frederick of Mainz. In 943, Pope Marinus II extended his position both as a representative of the Pope and a messenger of the Church to Germany and France. In part, this was to deal with the violent tensions with the German King Otto the Great.

Pope Marinus II also sought to correct injustices within the Church’s rank. One such example comes from his discipline towards Bishop Sico of Capua. During his papacy, the bishop took over one of the churches without permission from the Pope. The church was given to local Benedictine monks in good faith. Pope Marinus II interceded and righted the issue.