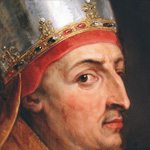 Pope Nicholas V was the 208th pope and was a member of the Dominican Order. His papacy lasted just over eight years and oversaw some of the most monumental moments in the Church’s history. This article will explore those exciting facts and more about Pope Nicholas V.

When the papacy of Pope Nicholas V began, Europe and the Church were both very divided and undergoing a cultural transformation. The former of those was in part due to the broken relationships that the previous Pope Eugene IV left behind. This is where Pope Nicholas V first focused his energy.

In France, the Wars in Lombardy were waged mostly between Milan and Venice, allied by Florence. There, the two fought over land rights, territory boundaries, and power. Pope Nicholas V called a congress to meet about these matters. Though it took some time, the Treaty of Lodi, which ended the fighting was signed in 1954. This repaired the Church’s relationship with King Charles VII of France.

In Germany, Pope Nicholas V established authority with the 1448 Concordat of Vienna. Signed also by the German King Frederick III, this gave the Pope much more control over the German Church. In particular, the pope, under the treaty, had the right to confirm bishop appointments. It also removed, at least temporarily the annates, or monetary obligations, owed by German church members to Rome.

Pope Nicholas V held a Jubilee year in Rome in 1450, just three years into his papacy. Meant to be held every 25 or 50 years, a jubilee year marks a time of universal pardon and forgiveness and generally includes a pilgrimage to Rome. Before 1450, Pope Martin V held a jubilee year in 1423. During the 1450 Jubilee held by Pope Nicholas V, several of the pilgrims and others made donations to the Church. These were used by the pope to advance the culture of the Church.

The Renaissance was in its early stages when Pope Nicholas V was in office. As such, he wanted to help bring the Church from the Middle Ages into a more culturally modern time. Pope Nicholas V did this through several building renovations, including the Vatican itself.

-He was born in Sarzana in the Republic of Genoa on November 13, 1397.
-His birth name was Tommaso Parentucelli. As Pope, he chose the name Nicholas in reverence to Niccolo Albergati, his early mentor.
-At the age of 57, he died on March 24, 1455, in the Papal States of Rome.
-His death is attributed to natural causes. He is buried in St. Peter’s Basilica.
-He became pope at the age of 49 on March 6, 1447.
-Following eight years and 18 days in office, his papacy ended with his death on March 24, 1455.
-With nearly twice as long in office, Pope Eugene IV preceded him.
-His papacy was succeeded by Callixtus III, who served for over three years.

-He began the designs of what would become St. Peter’s Basilica, where he is buried.
-His papacy saw the end of the Hundred Years War, a series of violent civil wars in Europe’s Middle Ages.
-The Ottoman Turks overtook Constantinople, the capital of the Byzantine Empire, during his papacy.
-He restored Roman engineer Agrippa’s Aqua Virgo and several other aqueducts in the city.
-He founded the Vatican Library.
-He moved the papal residence from the Lateran Castle to the Vatican Palace.
-He held the last coronation in Rome in March 1452 by crowning Frederick III.