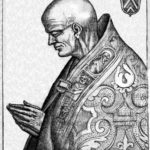 Head of the Catholic Church and Papal States between 1099 and 1118, Paschal II was the 160th pope, ruled as Supreme Pontiff for a little over 18 years, and played a significant role in England’s Investiture Contest.

Paschal II was born sometime between 1050 and 1055 in Bleda, also known as Bieda di Galatea, Italy. His parents named him Raniero, and at a very young age, he left home to live in the Abbey of Cluny and eventually became a monk. He devoted himself to the church, and it paid off — because sometime between 1073 and 1080, Pope Gregory VII appointed him cardinal of San Clemente.

Paschal II and the Investiture Contest

Paschal II is most remembered for his role in the Investiture Contest, a church-vs-state conflict over papal privilege. It lasted for decades, and historians consider it one of medieval Europe’s defining events.

It all started in 1076 when King Henry IV of what is now Germany and Pope Gregory VII clashed over who could give new bishops their staffs and rings, a politically important and symbolic ceremony known as an “investiture.” Henry IV thought kings should be the ones to appoint bishops and church officials. Predictably, Pope Gregory VII thought differently. He believed church matters should only be handled by the church.

The disagreement mushroomed into a half-century-long conflict that thrust much of Europe into civil wars. However, the issue didn’t reach British shores until 1103 when Pope Paschal II and Henry I of England locked horns over the right to “invest” bishops.

Eventually, the two sides reached various compromises. Kings retained the right to perform some investiture ceremonies. In return, the monarchs agreed to stay out of the bishop, cardinal, and papal selection processes.

Before he rose to the position of pope, Raniero served as the legate to Spain, meaning he was the pope’s official representative in Spain.
Pope Paschal II was a member of the Order of Saint Benedict, also known as the Benedictines.
The First Crusade happened between 1096 and 1099, making Paschal II one of the popes to reign during the famous medieval religious war.