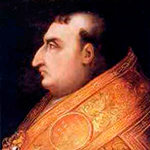 The 211th Catholic Pope, Paul II was the nephew of Eugene IV, who was the 207th Pope and his mother’s brother. Eugene inspired Paul to join the priesthood even though he was trained to be a merchant. Probably due to his uncle’s influence, he rose rapidly through the ranks of the church and became an archdeacon, a bishop then a cardinal-deacon when he was still in his 20s. Paul, then Cardinal Barbo flourished under Eugene as well as Eugene’s successors Nicholas V and Calixtus III, but Pope Pius II had little use for him.

Paul was probably elected Pope because the cardinals in the papal conclave disliked the policies of Pius II. He seemed to have agreed to a set of rules and stipulations the cardinals had drawn up to reign in his power. However, once Paul became Pope, he ignored them.

Besides the building of the Palazzo Venezia in Rome, little of importance was done during Paul II’s papacy.

Paul II was a pleasure-loving and generous Pope who was drawn to the good things in life. His portrait by Cristofano dell’Altissimo shows a fat, tonsured, hook-nosed man dressed in gold vestments. He was fond of dressing up, wore makeup in public and commissioned a sensational papal tiara encrusted with gemstones. He wanted to take the name Formosus II, which meant “handsome,” but was talked out of it. He was the Pope who built the Palazzo San Marco, now the Palazzo Venezia and filled it with artwork and antiques. When he died, he had amassed hundreds of thousands of ducats worth of gemstones. One diamond alone was worth 7000 ducats.

Though he was hostile when it came to science and humanist knowledge, Paul encouraged the new technology of printing, though he had any books screened and censored. He allowed horse racing through the Via Lata (now the Via del Corso) during Carnival. He entertained lavishly, tried to prevent blood feuds and encouraged the fair treatment of Jews. He even held races for Jews as well as Christian men, boys and the elderly. He helped the poor and gave pensions to some cardinals who’d fallen on hard times.

On the other hand, Paul II was secretive and jealous of his prerogatives as Pope. He created cardinals in pectore, which meant that their names weren’t published. Some of these cardinals were his nephews as he had been the nephew of Eugene IV.

He excommunicated King George of Bohemia then excommunicated the man who was the king’s apologist. Paul also made a serious enemy of the writer Bartolomeo Platina, who was a member of both the College of Abbreviators and the Roman Academy. Paul abolished both of these institutions and had Platina jailed when he protested. Later, Platina and other former Academy members were arrested again and tortured, though they survived and were released. Platina’s written diatribes against Paul would mar the Renaissance Pope’s reputation for years.

Paul II is entombed in Saint Peter’s Basilica in a sarcophagus created by Giovanni Dalmata and Mino da Fiesole.