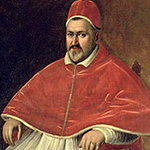 Pope Paul V is remembered as one of the most powerful and influential popes of the Renaissance. During his time as head of the Roman Catholic Church, Paul V served as both a religious leader and a skillful political leader, advancing the cause of the Catholic Church in halls of power around the world. In this article, we’ll look into the life of Pope Paul V and examine some of his most important acts during his reign.

Early Life and Service as Cardinal

Paul V was born in Rome in September of 1550 as Camillo Borghese. The scion of the wealthy and influential Marcantonio Borghese, Paul V began his career in the Catholic Church as a canon lawyer after intense study at universities in Padua and Perugia. After serving as an envoy to Spain, Paul V was made a cardinal by Pope Clement VIII and eventually became Cardinal-Vicar of Rome in 1603. In his time as a cardinal, Paul V developed a reputation as being both uncompromising and impartial to the many factions in the Catholic Church.

Rise to the Papacy

After the only 27-day reign of Pope Leo XI, the Catholic Church scrambled to choose a new pope in the papal conclave of May 1605. During the conclave, the cardinals faced a difficult choice, with many preferring candidates such as Cardinal Caesar Baronius and Cardinal Robert Bellarmine. In the end, the conclave chose Borghese due to his impartiality. The cardinal then chose the name Paul V and immediately began making changes to the church.

First and foremost, Paul V ordered bishops residing in Rome to return to their home dioceses. In making this provision, Paul V was following doctrine established by the Council of Trent, which mandated that all bishops live in their jurisdictions. The new pope then sought to strengthen the power of his office by restoring all authority and privileges that had been taken away in previous years.

Pope Paul V and the Papacy on the International Stage

During his tenure as bishop of Rome, Paul V got into numerous conflicts with secular rulers. The first and by far most famous incident involved a dispute with the Republic of Venice over ecclesiastical jurisdiction. When two priests were arrested in Venice, Paul V intervened, asking that the clergymen be remanded to his custody. When the government of Venice refused, the situation quickly escalated, with many in both Rome and Venice questioning how far the Catholic Church could claim power in state issues. In the end, the dispute between Paul V and the Venetians was mediated by King Henry IV of France, who became a dear friend to the pope.

Paul V next made an impression in international politics by having a disagreement with King James I of England. In letters written to the English king, Paul V noted how deplorable James’s oath of allegiance was to Catholics living in England. The oath required Catholics to declare their loyalty to the English Crown over the pope in Rome. One of the biggest points that drove James’s decision to make this oath mandatory was Catholic participation in the Gunpowder Plot of 1605, which was an attempted assassination against James and many members of the English Parliament. When the English government refused to lift the oath, it resulted in widespread condemnation from Rome and divided many English Catholics from the church.

Paul V’s family, the Borgheses, were incredibly powerful in Italy. Originally from Siena, the Borgheses claimed that the city’s most famous saint, St. Catherine, was part of their bloodline. Through the centuries, the Borgheses occupied many positions of extreme power in Italy. Some members of the family were even dukes and cardinals.

As previously stated, the papal conclave of May 1605 was extremely contentious, with cardinals disagreeing on who should succeed Pope Leo XI. The situation became so tense that many cardinals were drawn into a physical fight. The conclave that elected Paul V is thus the only time where members of the Catholic clergy were injured when choosing a pope.

While Paul V was chosen by the papal conclave for his impartiality, his time as pope was marred by accusations that he favored members of his family. Those critical of Paul V noted that he frequently gave positions of prominence in the church to his relatives. Contemporary historians point out that such behavior was common for popes of the era.

Paul V had a dispute with the astronomer Galileo. In 1616, Paul V was informed of Galileo teaching Copernicus’s theory of a heliocentric universe, which argued that the Earth rotated around the Sun. Such theories were considered heresy by the Catholic Church at the time. While Paul V banned Galileo from teaching the Copernican theory, he nevertheless allowed the astronomer to study it. Later on, Paul V placed Galileo under his protection, declaring that he would not be prosecuted by the Roman Inquisition while he served as pope.

Paul V did much to speed up construction on many projects in Rome. In this endeavor, his biggest contribution was to St. Peter’s Basilica. Paul V made sure that the church raised funds during his reign to finish the building that would become the spiritual center of Rome for centuries to come.