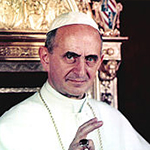 Paul VI is the 262nd man to serve as the leader of the Catholic Church and the sixth man to take the papal name of Paul. This article intends to make him easier to remember by highlighting his origins, notable activities during his time with the church and any appreciable or controversial moments of his papacy.

Giovanni Montini was born to Giorgio Montini and Giudetta Alghisi. Giorgio earned his living as a lawyer, journalist, member of Italy’s Parliament and director of Catholic Action and Giudetta belonged to nobility. Montini had two brothers, Francesco, a physician, and Lodovico, a lawyer and politician. He attended a Jesuit school named Cesare Arici, later receiving a diploma from Arnaldo da Brescia in 1916. Pursuing his education frequently his a speed bump due to illness.

Time with the Church.

1916 would also see Giovanni enter the seminary and eventually receiving his ordination on May 29th, 1920. 1920 would also be the year he finished his higher education, receiving a doctorate in Canon Law. Beyond the schools of Milan, Giovanni would study at the Gregory University, the University of Roma La Sapienza and the Accademia dei Nobili Ecclesiastici. Two years later, he entered the Secretariat of State. Due to his heavy focus on education, he was never appointed as a parish priest.

He endured a single foreign post in service to the Holy See, working within the office of Poland’s papal nuncio in 1923. This gave him a displeasing but useful introduction to intense nationalism. His great proficiency with organization earned him a job with the Roman Curia, the civil service arm of the papacy. 1931 would see him become a teacher at the Pontifical Academy for Diplomats.

Once war exploded throughout the European continent, Giovanni was among the leaders of the Holy See’s Secretariat of State. Giovanni focused on the “ordinary affairs” of the organization and also served Pope Pius XII in a capacity similar to a personal secretary, keeping the pope apprised of obligations, appointments and important news. Giovanni’s position also meant that he would often be the one drafting replies to the countless letters of worried and grieving families of soldiers and casualties.

In 1954, Giovanni succeeded Alfredo Ildefonso Schuster as Archbishop of Milan, whom Pope Pius XII referred to as his “gift to Milan.” After settling into his new building in January of the following year, Giovanni went to great efforts to preach universal love and the construction of over 100 new churches. His church-building efforts were out of a realization that churches are necessary yet non-utilitarian structures.

He also used his position to see to reforms at the local level, expanding the delivery of sermons beyond just churches and into all manner of public areas. During the Second World Congress of Lay Apostolate in 1957, Giovanni clarified the role of apostles by stating that they would show love toward all, especially those who needed help.

On December 15th, 1958, Giovanni was appointed Cardinal-Priest of Ss. Silvestro e Martino ai Monti. This new position gave him a great deal of diplomatic travel, sending him to several African nations, Brazil and several cities in the United States of America.