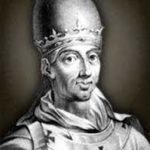 Pelagius II was a Gothic pope descended from the Ostrogoths. Born in Rome, this heresy battling pope struggled most of his pontificate with defending the city of Rome and driving off the Lombards who were determined to seize and control the city and region. Pelagius was among the last of the early popes to enjoy a friendly working relationship with the Eastern Roman Emperors in Constantinople who aided him in the struggles to defend Rome as they were able to.

Pelagius II was born on February 7th in 590 A.D. in the city of Rome. As with the several popes who preceded him, Pelagius entered into an Italian world of shifting political chaos. The Roman Empire in the West was over a hundred years collapsed when Pelagius came into being. This was evidenced by the fact that he was already the second Gothic descended pope by the time he was elected, born an Ostrogoth of the people who had first supplanted the late empire in Italy.

The election of Pelagius II proved to be controversial at the start. He received election in 579 but the city or Rome was already hard besieged by the Lombards. Because of this, Pelagius was consecrated on the 26th of November in 579 A.D. without receiving critical imperial confirmation from the Eastern Roman Emperor in Constantinople. This was a sign of more trouble to come, as most of his pontificate Pelagius suffered almost continuously from harries and attacks from the Lombards who threatened the peoples of Italy as well as Rome.

Pelagius felt that he desperately needed military aid to drive out the Lombards from Rome’s environs. He dispatched his deacon Gregory (who himself would one day become the famous Pope Gregory the Great) to be his nuncio to Constantinople. Gregory sought aid from the Eastern Roman Emperor Tiberius II to deal with the Lombards. Unfortunately for Pelagius and the peoples of Italy, Tiberius was tied down by wars with the neighboring eastern Persian Empire. This marked a turning point in Papal history as the first time that the pope would turn to the Catholic Franks for military help and support.

Pelagius wrote a letter in 580 to the Bishop of Auxerre, himself a Frank. In this he insisted that the Franks had the sacred Christian duty to defend Rome and the Italian people from the “deathly race” of the barbaric Lombards. The Franks were only willing to help in exchange for certain concessions from the Eastern Emperor. It fell to deacon Gregory to persuade Emperor Tiberius to approve this unusual appeal to grant the Franks both the authority and subsidies that they demanded for their military aid.

The Lombards’ advances were halted with the arrival of Frankish soldiers, but the Lombards then patiently assumed a defendable position until the Franks subsequently withdrew at the illness and death of Frankish leader Charles Martel “the Hammer.” The Lombards were again threatening Rome until Pelagius appealed to the successor of Tiberius, Emperor Maurice for help. Maurice directed his representative in Italy the Exarch Smaragdus in Ravenna to support the Pope’s efforts. Smaragdus involved his troops and then was instrumental in negotiating a lasting peace settlement in year 585 A.D. that held for nearly five years.

Pelagius did not have as much success ending a long-running schism in the Western Roman church known as the Three Chapters Controversy that had arisen as a result of a complex argument between the papacy, Emperor Justinian, and the Council of Constantinople in 553. This schism was to last all the way through 610 A.D.

Pelagius II still found the time, energy, and money to direct several important building projects around the city of Rome despite the chaos he seemingly battled for much of his papacy. He started the building of the presbyterium of St. Peter’s Church to feature the high altar rising atop the shrine of St. Peter. He ordered a covered passage to direct to a little chapel placed right behind Peter’s shrine so that daily mass could be held here. Also the first Lateran monastery of San Pancrazio was established in his reign when the Benedictine monks of Montecassino fled the ruin of their devastated abbey that the Lombards had sacked in 577.

Pelagius II also ordered the construction of other Roman building projects in the city. One of these was a basilica next to San Lorenzo Fuori le Mura. He also oversaw the conversion of the Spanish Kingdom of the Visigoths to Catholic Christianity from their heretical form of Arian Christianity.

Despite his best efforts, Pelagius could not settle a dispute that began when St. John IV the Faster, Constantinople’s bishop, became the ecumenical patriarch of the city. Emperor Maurice ultimately supported John against Pelagius’ disapproval of his use of the title ecumenical patriarch, which sounded suspiciously like the beginning of an attempt to set up the Constantinople patriarchs as rivals or even superiors to the popes in Rome. Thus began a centuries’ long-lasting titular dispute between Eastern and Western churches that worsened when Pelagius would not accept decrees from a church council held in Constantinople and endorsed by Patriarch John.