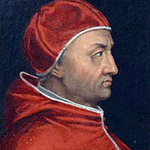 Born into poverty, Pope Pius III became the 216th pope and had one of the shortest reigns in the long history of the papacy. One of several popes to come from Italy, he is often credited with initiating moral reform combating nepotism and corruption within the Catholic church. This article provides a glimpse into the life of Pope Pius III as well as some interesting facts about the man himself.

Born to the sister of Pope Pius II, Laodinica Piccolomini and her husband, Nanno Todeschini, Francesco Todeschini was their fourth child. With few prospects as a child, Francesco was taken in by his uncle, Pope Pius II, at 18. His uncle put him through school and propelled him into the hierarchy of the Catholic church.

Shortly after he graduated with his law degree from Perugia, Francesco was appointed as Archbishop of Siena by his uncle. He was elevated to the position of Cardinal-Deacon not long after. All before he had reached 21 years of age.

His young age caused many in the church hierarchy to question his commitment, but all accounts describe Francesco as a pious man of spotless character. Even after the death of his uncle, Pope Pius II, in 1464, Francesco continued to serve the pope and the church.

Archbishop Piccolomini commissioned a library to be built adjoining the Siena Cathedral. It was intended to hold the collection of humanist texts owned by his uncle, Pius II. Although the books never reached their intended location, the library stands as a testament to the High Renaissance in Siena.

Upon the death of Alexander VI, his son, Cesare Borgia, laid siege to the Vatican to control the decision of the conclave. Hidden in the Church of the Minerva, the conclave proceeded with their election of the new pope without outside interference. However, the Cardinals were unable to reach a consensus on one candidate. Thus, they elected a compromise candidate, Pius III.

Although he later worked against nepotism within the Catholic church, Pius benefited from it by being appointed to the position of Cardinal by his uncle, Pope Pius II, before the age of 25.
Pope Pius III only became pope because the conclave could not reach a majority vote on any of the three favored candidates. He was a compromise candidate.
Although his papacy officially began when the conclave elected him on Sept. 22, he was not consecrated as the new pope until Oct. 1. This shortens his papacy to only 17 days.
Many believe that Pius III played a part in the death of Giovanni Borgia, son of Pope Alexander VI, in 1947. His murder was indicative of the corruption within the Catholic church during this period.
Pius III had 10 frescos created by the artist Pinturicchio within the Piccolomini Library to honor his uncle’s life and papacy.