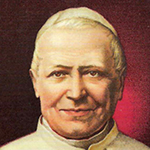 Pope Pius IX was the 255th man elected to lead the Catholic Church and the ninth such individual to choose “Pius” as his papal name. This article will discuss major moments in his life and summarize his papacy while also spicing things up with a few personable tidbits about the man to keep students invested in learning.

Giovanni Mastai-Ferretti was born the ninth of Girolamo dei conti Ferretti’s children, making him nobility. He studied at Volterra’s Piarist College and also within Rome. While he was a young man within the Guardian Nobile, he fell in love with Miss Foster, one of the Irish Bishop of Kilmore’s five daughters. Mastai’s parents refused to accept the union and chose not to attend their son’s wedding.

Mastai encountered the newly-freed Pope Pius VII in 1814, while studying Theology in Sinigaglia. A year later, he joined the Papal Noble Guard, only to subsequently be dismissed from service due to his epilepsy. Pius VII listened to his worries and allowed him the opportunity to continue studying theology. While Pius VII suggested that another priest help Mastai during Holy Mass, this was retracted when the attacks occurred less and less frequently. Mastai formally joined the priesthood on April 10, 1819.

Mastai started his clerical work within the Tata Giovanni Institute. He was also deployed to Chile, in 1823, and Peru, in 1825, to help Monsignores Muzi and Kane, respectively, during the first post-Revolutionary mission trip to South America. Said mission was intended to assess the Church’s role in a newly independents South America. After returning to Rome, Pope Leo XII made Mastai the head of San Michele’s hospital and later appointed him Archbishop of Spoleto in 1827.

Four years into Mastai’s time as Archbishop, Spoleto was dragged into the revolutions of Parma and Modena. Archbishop Mastai received a general pardon upon the suppression of this revolution, earning him recognition as a liberal Catholic. He also gained recognition for efficiently organizing relief efforts in the wake of a disastrous earthquake. A year later, he relocated to the Imolan diocese, becoming a cardinal in pectore in 1839, then a full Cardinal-Priest of Santi Marcellino e Pietro a year later.

Just like his oversight of Spoleto, Mastai focuses on growing the Church through charities and improvements to the education system. He was known to visit the jailed and also for creating assistance programs focused on street youths. His perception as a liberal came from support of changes to the Papal States’ hierarchy and for sympathizing with Italian nationalists.

Pius IX was elected to the papacy in order to break a deadlock. A subsequent election resulting in all but the conservative electors favoring him over Luigi Lambruschini.