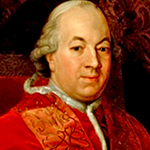 Pope Pius VII was the 250th leader of the Catholic Church and the sixth among that lot to take the name “Pius.” This article seeks to distinguish him from his many papal forebears and successors by focusing on specifics and details of his life and papacy.

Giovanni Braschi was the eldest of Count Marco Aurelio Tommaso Braschi’s and Ana Teresa Bandi’s eight children. After studying at Cesena’s Jesuit college, where he earned doctorates in canon and civil law, he pursued further education within the halls of the University of Ferrara. His first work with the Church was as secretary to Cardinal Tommaso Ruffo, the papal legate and Bishop of Ostia and Velletri. Ruffo appreciated the young man and elevated him to auditor upon becoming Dean of the Sacred College of Cardinals.

In recognition of his considerable diplomacy within the court of Naples and shortl after Cardinal Ruffo’s death, Pope Benedict XIV appointed Braschi to serve among his secretaries. after abstaining from marriage in 1758, Braschi formerly joined the priesthood and also served as Referendary of the Apostolic Signatura until a year later. He would then become auditor and secretary for Pope Clement XIII’s nephew, Cardinal Carlo Rezzonico. 1766 would see Clement XIII intervene again, appointing Bruschi to treasurer of the camera apostolica.

Bruschi would later become elevated to Cardinal by Clement XIV on April 26th, 1773, serving as Cardinal-Priest of Sant’Onofrio. Soon after, he retired to the Abbey of Subiaco.