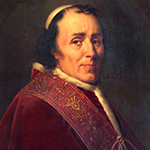 Pope Pius VII was the 251st leader of the Catholic Church and the seventh among that lot to take the name “Pius.” This article seeks to distinguish him from his many papal forebears and successors by focusing on specifics and details of his life and papacy.

Barnaba was the youngest of Count Scipione Chiaramonti’s sons. Due to some extended familial connections through his maternal grandfather, the Marquess Ghini, he was related to Pope Pius VI. Much like his other brothers, he attended Ravenna’s Collegio dei Nobili; unlike his brothers whom joined the Order of Saint Benedict, he chose to join Cesena’s Abbey of Santa Maria del Monte at age 14. Two years later, he would become a professed member, taking the name Gregorio. He then taught at Benedictine colleges within Parma and Rose before becoming fully ordained into the priesthood on September 21st, 1765.

After his relative Giovanni Angelo Braschi became Pope Pius VI, Chiaramonti became his personal confessor. Come 1776, Pius VI made him the honorary abbot in commendam of Rome’s Monastery of Sant’Anselmo, the very monstery Chiaramonti had been teaching within. This was greeted with complaints by the locals, as it did not seem to fit the Rule of St. Benedict. In 1782, Pius VI would elevate Chiaramonti to Bishop of Tivoli. A little over two years later, he was elevated to Cardinal-Priest of San Callisto and then Bishop of Imola. He maintained the office of this last position until 1816.

When the French Revolutionary Army invaded in 1797, Cardinal Chiaramonti pressed his diocese to submit to the new regime. In that year’s Christmas homily, he reminded his followers that democracy did not opposite Catholicism.