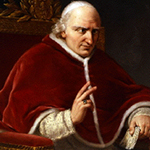 Pope Pius VIII was the 253rd man elected to lead the Catholic Church and the eighth man to take the papal name of Pius. This article will discuss his life and summarize his papal dealings, while also providing several more personable tidbits about the man in order to keep him distinct from the Church’s many popes.

The man who would become Pope Pius VIII began life as Francesco Castiglioni. Francesco was the third of Count Castiglioni and Sanza Ghislieri’s eight children. He enrolled into the Society of Jesus’ Collegio Campana, then continued his education at the University of Bologna. It was in 1785, at the latter institution, that Francesco earned his doctorate in Canon and Civil Law. He was later ordained as a priest on December 17th of the same year.

Castiglioni was made Bishop of Montalto on August 11th, 1800, receiving his consecration from Cardinal Pamphili six days later in Rome’s Church of Santi Domenico e Sisto. During his time as bishop, he refused to swear fealty to neither Emperor Napoleon nor the Kingdom of Italy. This earned him an arrest in 1808 and an escorted trip through Milan, Pavia, Mantua, Turin and then back to Milan.

Upon Napoleon’s defeat, Castiglioni was free to return to his diocese in 1814. Two years later, in 1816, Pope Pius VII would commend him for remaining loyal and elevated Castiglioni to Cardinal-Priest of Santa Maria. Castiglioni would be appointed to several notable offices after becoming a cardinal, eventually becoming Frascait’s Cardinal-Bishop. When the Papal Conclave of 1823 convened, Castiglioni was deemed to be a strong candidate for the papacy; Pius VII had affectionately refered to the man as “Pius VIII.” The two main candidates for the papal crown were Cardinal Castiglioni and Cardinal della Genga; della Genga won more votes and was elected to the papacy, taking the name Pope Leo XII.

After Leo XII‘s death, Castiglioni won the subsequent conclave and took the name of Pius in homage to Pius VII’s nickname for him.