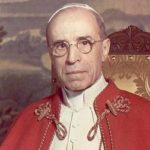 Pope Pius XII was the 260th man head of the Catholic Church and the 12th such individual to choose “Pius” as his papal name. This article will discuss major moments in his life and summarize his papacy while also spicing things up with a few personable tidbits about the man to keep students invested in learning.

Eugenio Pacelli was born into a family with deep connections to the Church. His parents were Filippo and Virginia Pacelli. Eugenio, his brother Francesco and his sisters Giuseppina and Elisabetta all grew up in Rome. After spending some time as an altar boy, Eugenio was sent to study under Professor Marchi, then to the Liceo Ennio Quirino Visconti Institute in 1891. Upon reaching age 18, Eugenio changed schools to the Almo Collegio Capranica in order to study theology, followed by the pursuit of philosophy at the Jesuit Pontifical Gregorian University; theology at the Athenaeum S. Apollinare and modern languages and history at La Sapienza. At the end of his freshman year, in 1895, he abandoned Capranica and the Gregorian University; Elisabetta blamed the Capranica’s food. After getting special dispensation, Eugenio continued studying seminary as an outside student. 1899 would see him finish his doctorate in Sacred Theology, concluding with a dissertation and oral exam given in Latin.

Pacelli received his doctorate in canon law on 1904 for his dissertation on the execution of canon law when concordats fall into abeyance. His work transitioned into working for Monsignor Pietro Gasparri, under a sub-organization of the Vatican Secretariat of State. By 1911, he was under-secretary for the Department of Extraordinary Ecclesiastical Affairs, then its adjunct-secretary in 1912 and finally its secretary in 1914. After Benedict XV succeeded Pius IX, Pacelli was appointed secretary of state. World War I would seem him keeping a running tally of prisoners of war for the Vatican.

Benedict XV made Pacelli nuncio to Bavaria in April of 1917; considering that neither Prussia nor Germany had a nuncio, this made Pacelli nuncio to the entire German Empire. After the chaos of the Armistice, Pacelli requested to be transferred somewhere safe, placing him in a Swiss sanitorium. Pacelli became the nuncio to Germany in June of 1920 and many of his staff from Munich continued to serve under him. When the Weimar Republic seemed consigned to dissolution, Pacelli was recalled to Rome. After a brief stint serving as Cardinal-Priest of Santi Giovanni e Paolo in 1926, he was made Cardinal Secretary of State on February 7th, 1930. Five years later, he would be made Camerlengo of the Holy Roman Church.

This legislation was crucial to the quartet of concordats Pacelli arranged between the German States and the Vatican. Because the German States, rather than the Vatican, oversaw education and culture, the role of the Church was in peril. The Reichskonkordat was a signed agreement between Germany and the Holy See and is considered the most important of Pacelli’s concordats. Pacelli had hoped to bolster the Church’s legal standing in Germany and sought for the protection of Catholic associations, education and the press. After a great deal of back and forth between the Church and Chancellor Adolf Hitler, the concordat was finally signed on July 20th, 1933; Pacelli provided the Church’s signature while vice-chancellor Franz von Papen signed for Germany.

Pacelli’s considerable work in foreign Church affairs made him a natural pick to succeed Pius XII. He chose “Pius” as his name in deference to his Italian heritage and having served under other great popes who chose the name.