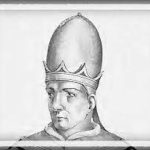 Pope Romanus served as the 114th Pope. We know very little about his life today. This brief article provides information about his papacy and times.

Few online sources report information about Pope Romanus. Despite the fact his grave reportedly lies in Saint Peter’s Basilica in Vatican City, the dates of his papal election and his date of death remain unknown (a surprising situation). Some historians surmise his birth occurred circa 867. If correct, this date would indicate he became Pope around the age of 30.

The father of Pope Romanus may have been a priest named Constantine. Born near Rome in Gallese, Pope Romanus possibly served as Cardinal of St Peter ad Vincula before becoming Pope in August, 897. He reportedly lived during a period of considerable dissension among church leaders. An historian and chronicle writer who compiled a history several decades after his death named Flodoard described him as a virtuous Pope.

During his papacy, Pope Romanus annulled some previous papal decrees issued by his predecessor, Pope Stephen VI. He did approve two Bishops, Gerona and Elna. He also permitted Vitalis, the Abbot of Farfa Abbey, to wear the vestments of the office of an Archbishop (the pallium).

Pope Romanus served as Pope for a period of only four months and 20 days. Historians today allegedly don’t know whether he passed away in office or whether he abdicated or suffered deposition. His burial at the Vatican might indicate that he passed away in office. Flodoard reports Pope Romanus became a monk after serving as the Pope. His successor, Pope Theodore II, reportedly served as a Pope for only 20 days.

Today, historians don’t know the date of Pope Romanus’ birth. Some conjecture he was born around 867 in Gallese, near Rome.

The date of death of Pope Romanus also remains unknown today. Some historians believe he either died at the end of his papacy, or he became a monk afterwards. Apparently, his grave today lies at Saint Peter’s Basilica in Vatican City.

The cause of death of Pope Romanus remains unknown.

Pope Romanus received election to the Papacy in August, 897. He became Pope shortly after the deposition of his predecessor, Pope Stephen VI.

Pope Romanus served as Pope for four months and 20 days.