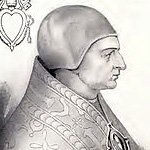 Pope Sergius II was pope from 844 to his death in 847. He was also the bishop of Rome during this time period. Three people in Sergius II’s family were pope at some point in time, and he was from a highly respected bloodline. Pope Sergius II was educated in the schola cantorum, which was a singing school organized by Pope Sylvester I and Pope Gregory I. This allowed him to be educated and in contact with previous popes prior to Pope Sergius II becoming one himself. He first became a cardinal priest at the Church of St. Martin and Sylvester by the previous Pope Paschal. He then became an archpriest under Pope Gregory II.

Churches and aqueducts were improved by Pope Sergius II prior to his death in 846. The pope is elected by an assembly of cardinals. They are the spiritual leader of the Catholic Church. Pope Sergius II was a teacher of the Roman Catholic faith. He was relied on to represent the business and spiritual side of his position. The pope also has to appoint bishops and cardinals. The title of Cardinal is given to those holding an elevated position in the church hierarchy. Cardinals advise the pope when asked and elect the successor of the pope when the current pope dies. The pope is an esteemed position that Sergius II held.