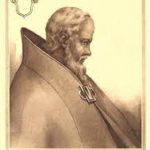 Though not a great deal is known about Pope Sergius IV, the one-hundred forty-second Bishop of Rome, the Pontiff is remembered for certain notable accomplishments. This brief blog offers a brief look of his early life, rise to becoming Pope, his Papacy and how he is remembered historically.

Historians are unsure of Pope Sergius’s birthday. However, they do know he was born Pietro Martino Buccaporci in a section of Rome known as Pina in humble surroundings. His father Peter was shoemaker and his mother Stephania was a homemaker.

As he grew older, Pope Sergius displayed pious tendencies and a quiet confidence and leadership style that ultimately inspired him to pursue a career as a Priest. He gradually rose through the ranks and, in the year 1004, was made a Cardinal of the Catholic Church by Pope John XVIII, who also happened to hold the office of Pope right before Sergius IV did. Pope Sergius served as Cardinal of Albano, an Italian diocese made up of seven towns just outside the nation’s capital of Rome.

In early January of 1009, Pope John XVIII gave up his duties as leader of the Catholic Church. During July of that same year, the then current Cardinal of Albano was elected Pope. Though named Peter, the new Pontiff decided to adopt the name of Sergius out of respect for Saint Peter, a close friend and top apostle of Jesus, who became the very first Pope following Jesus’s death.

Sergius IV’s quite and humble nature did not change once he assumed command of the Church. Unfortunately, these personality traits caused him to be overshadowed by the actions of powerful Roman leader John Crescentius. Some historians argue that Pope Sergius IV and other Popes who ruled during Crescentius’s time as Rome’s leader had little power because Cresentius played a large part in each Pontiff being elected to that position.

That said, Sergius IV is remembered for certain noteworthy achievements. Arguably, the most important event that occurred during his rule was the prevention of Rome being overtaken by Emperor Otto III, the Holy Roman Emperor, the leader of am aggressive and influential empire that controlled a large portion of Europe for many centuries.

Additionally, some historical figures believe Sergius IV wrote a Papal Bull, which is an official letter ordering the Muslin population by driven from the Holy Land. This came following the 1009 destruction of the Church of the Holy Sepulchre in Jerusalem, which is built on the grounds where religious historians believe Jesus was crucified, buried and resurrected. This crime was reported to have been committed by the Fatmid Caliphate, a large and powerful Muslim land spanning a large portion of modern day Africa and the Middle East.

*Born-Historians are unsure of Pope Sergius IV’s exact date of birth.
*Name-The Pope was known as Pietro Martino Buccaporci.
*Died-Sergius IV passed away May 12, 1012.
*Cause Of Death-Though not confirmed, some historians suggest that the Pontiff was murdered because his demise occurred very shortly after John Crescentius’s.
*Papacy Began-Sergius IV’s reign began July 31, 1009.
*Papacy Ended-The Pontiff’s reign ended on the date of his death, May 12, 1012.
*Successor-Sergius IV was succeeded by Pope Benedict VIII.

*Peter Martino Buccaporci was actually the nickname people knew Sergius IV as before he became Pope. Historians believe the name Buccaporci, which in Italian, means pig’s snout, was given to the future Pontiff because of his lifestyle habits.
*Sergius IV is buried inside Rome’s Lateran Basilica, which is widely though of as one of the world’s most holiest churches.
*Sergius IV enjoyed helping poor people. During his reign, he organized numerous efforts to feed parishioners starving due to local famines.
*Though Sergius IV is not officially recognized as a saint, the Benedictines, a monastic order of the Catholic Church revere him and sometimes refer to him in saintly terms.