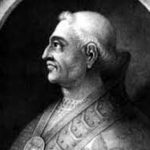 Pope Severinus was the 71st pope, holding the title officially for 66 days. Though brief, this is only the 18th shortest papacy. In this article, the facts of Pope Severinus’ life and legacy will be examined.

The Ecthesis and a Stalled Election

Pope Honorius I died on October 12, 638. Soon after, in mid-October of 638, Pope Severinus was elected for the papacy. However, he was not able to take office for nearly two years.

This came as Sergius I of Constantinople released the controversial Ecthesis. This letter attempted to fix some of the divisions that arose over the years in the Catholic Church. The Ecthesis did this using a Monothelitism view of Christianity. It represents the power struggle between the Byzantine Empire and the Catholic Church. Byzantine Emperor Heraclius made the Ecthesis letter an edict, meaning Pope Severinus must accept this altered view of Christianity to become pope.

The Raids on the Lateran Palace

The Byzantine Empire appointed Isaac, the Exarch of Ravenna, to convince Pope Severinus to accept the Ecthesis. To do so, Isaac manipulated Roman forces against him. Issac met with unhappy Roman nobles and soldiers, suggesting that Pope Severinus withheld their salaries. From discontent to angry, the group rushed the Lateran Palace in an attempt to sway Pope Severinus.

Pope Severinus fended off the violent mob, assuaging them with money. Soon after, several more mobs and emissaries came. Each time, they would help themselves to more of the Lateran Palace’s treasures.

While these at times violent raids were occurring, emissaries from the Emperor came to discuss terms with Pope Severinus. Through several back and forths, Pope Severinus outright refused the teachings in the Ecthesis. Unfortunately, the time took its hold on him, and Pope Severinus became very aged. Eventually, he acquiesced to the Empire’s modified terms.

-Though the exact date is unknown, his birth year is placed around 585, making him 55 years old during his papacy.
-No additional birth name is given to him besides Severinus.
-He died on August 2, 640 while in office.
-His death is attributed to natural causes.
-His papacy officially began on May 28, 640, although he was first elected in October of 638.
-His short term lasted just over two months, ending with his death on August 2, 640.
-Before him, Pope Honorius I held the office for nearly thirteen years.
-From months after Pope Severinus’ death, Pope John IV succeeded him.

-He is credited with rebuilding the apse in St. Peter’s Basilica, where he is buried.
-He is described as a kind, hold, and modest man in the Liber Pontificalis.
-He allegedly told the Emperor, “You’re not the boss of me.” in regards to denying him the papacy.