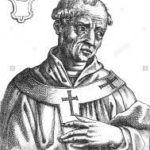 Pope Sisinnius was the 87th pope of the Church of Rome and was born to a Syrian man named John. After his predecessor, Pope John VII died Sisinnius was elected three months afterward and was consecrated (think being sworn into office, in this case, the position is the Archbishop and Pope of the Roman Church) on January 15 708.

Life Before the Papacy

Sisinnius’s life before his tenure as Pope is shrouded in mystery. One of the few things that we do know about him, aside who his father was (there are no records of his mother’s identity) is that he was born in 650 in Syria during the Rashidun Caliphate (one of the first Islamic states that created after the death of the prophet Muhammad led by a caliph – a religious and political leader).

Another thing that is known about Sisinnius is that he did not make large (comparatively speaking) donations to the church during his reign as pope. The total that he gave is around 310 pounds of silver and 42 pounds of silver. This was found to be only a small percentage of what other popes – both past and future – contributed. This has led many historians to believe that he was not of the aristocracy.

During his time as pope, Sisinnius was unable to do much – his time as pope was very short – but what he did manage was of great help to the people. Sisinnius ordered that damaged parts of the walls of Rome (these were defensive walls that the Roman people built around their cities) and consecrated a bishop for the island of Corsica.

• It isn’t known for sure how he died, but there are records that state that he’d had such a bad case of gout that he couldn’t move to feed himself. He was buried in Old St. Peter’s Basilica

• His successor was Constantine

• Perhaps one of the most interesting things about Sisinnius’s time as pope is that his papacy was incredibly short. He took the position on January, 15 708 as stated earlier, but his tenure only lasted twenty days – not even a month. His pontificate ended on February, 4 708; the day he died

• The strange thing about Sisinnius is how little we know about him compared to his contemporaries. There are very little records about his life before, during, or after his term as pope

• Sisinnius is one of six popes that was born in Syria, the final of which was his successor, Constantine

• Speaking of Pope Constantine, it has been speculated that he may have been Sisinnius’s brother

• The only confirmed member of Sisinnius’s family is his father who was named “John”, we don’t know anything about his mother or if he had any other siblings aside from his possible brother Pope Constantine