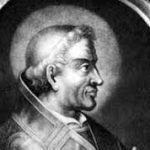 Pope St. Agapetus was the 57th pope and is acknowledged as a Catholic saint and an Eastern Christian saint. Though his papacy lasted just short of a year, he served the role under some of its most trying times. This article will address these exciting facts and more about Pope St. Agapetus.

A Stand For Order

Not much is known about Pope St. Agapetus before he was pope. It is clear that he was a deacon in Rome by around 502. Sometime before 535, he was promoted to the archdeacon. His 535 election to the pope was amidst turmoil and political strife, leading to his first act.

Pope St. Agapetus first sought to set the record straight in the eyes of the clergy. Prior to Pope John II, his predecessor, a contentious situation rose between Antipope Dioscorus and Pope Boniface II. Both claimed to be the rightfully elected pope. Pope Boniface II said that he had the blessing of the previous Pope Felix II, and that Antipope Dioscorus only had political sway. Though the Eastern Empire accepted Dioscorus as Pope, he would die just three weeks later. In the end, Pope Boniface II took the office. Here’s where the history involves Pope Agapetus.

According to records, clergy members were forced to condemn Dioscorus in writing by Pope Boniface II. Once in office, Pope St. Agapetus burned the document in front of the clergy and had all accounts of Pope Boniface II’s use of force recorded.

A War to Come

During his short papacy, the Byzantine Empire, under the helm of General Belisarius looked to invade Italy. It was the Ostrogothic King Theodahad who informed Pope St. Agapetus of this. Following his advice, Pope St. Agapetus and five bishops left in winter to meet with the Byzantine Emperor Justinian I. They made it to Constantinople in February of 536. Unfortunately, Emperor Justinian I claimed things were too far in motion to stop, and so did not call off the impending invasion.

Instead of backing down, Pope St. Agapetus consecrated Mennas, Anthimus’ successor. This move must have worked, as Emperor Justinian, I replied with his written profession of faith.

The strongly worded, eloquent Pope St. Agapetus has four surviving letters written near the time of his death. Two of these are communicating with Emperor Justinian I. In these, they discuss the emperor’s faith and the components of the Church. In one of them, Pope St. Agapetus vehemently refuses to adopt the Orders of the Arians. The other two are to bishops in Africa, one specifically to Bishop Repartus of Carthage.