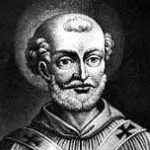 Pope Anastasius I was the 39th bishop of Rome. Though he only served for a little over two years, his legacy lives on as a canonized saint of the Roman Catholic Church.

Written records from the fourth century are few and far between, so little is known about the birth of Anastasius I. Historians believe he was born in Rome and the son of a man named Maximus. Still, they’re unsure what year he came into the world, though 330 is thrown around as a possibility.

Nobody is sure what names Pope Anastasius I had or used before ascending to Rome’s sacred throne, but some intriguingly deduce that his baptismal name may have been Innocentius. You see, Anastasius is one of the early popes who fathered children. Back then, the rules were different, and some bishops, cardinals, and pontiffs had families before being called to the church.

According to vague records, Pope Anastasius I wed and fathered a child as a young man. When his wife passed away, he never remarried, choosing instead to commit himself to the Roman Catholic Church.

Pope Anastasius I. Origen of Alexandria

During Anastasius I’s short tenure as head of the Catholic Church, he spent a lot of time condemning the writings of Origen, an influential, third-century theologian from Alexandria.

Origen is now considered an Early Church Father, but back then, he was a highly controversial figure. Theologians of the time were laser-focused on defining the religion and uprooting heretics. In service of those ends, monks throughout Christendom were busy translating works from early thinkers, including Origen. Epiphanius of Salamis was the first to criticize Origen’s stance on subordinationism, the belief that Jesus Christ and the Holy Spirit are below God in the celestial hierarchy. Eventually, an anti-Origen wing of the church arose, of which Pope Anastasius I and Jerome of Stridon belonged. In addition to subordinationism differences, Anastasius I and his crew also had problems with Origen’s fondness for allegory and his tendency to speculate about topics instead of approaching them “dogmatically.”

Pope Anastasius I was so concerned with Origen’s writings he held a conference on the matter where bishops from all over came to Rome to debate the issue.

Since Anastasius I served as the bishop of Rome early in the church’s history, strict celibacy rules had yet to be enacted, and he had a recognized child.
Anastasius I is one of the very few — or perhaps only, according to some historians — popes whose son succeeded him.
Pope Anastasius I instructed priests to bow their heads when reading from the gospels.
Anastasius I is a saint of the Roman Catholic Church, and his feast day is December 19.
He was a staunch supporter of persecuted Christians living in North Africa.
Jerome of Stridon was a big fan of Pope Anastasius I and described him as “rich in poverty.”