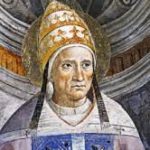 Pope Anterus was the 19th pope and became pope a few months after Pontian abdicated. He ruled for just 43 days and likely died as a martyr or during the Christian persecution. You can learn about his short papacy in this article.

Born circa 180 AD, Anterus was given the name Antheros at birth. His father was named Romulus who came from Calabria in southern Italy. Some believe that he spent his early years as a slave and was later freed, which explains his name. He may have had Greek ancestry too. Instead of Romulus being his father, he may have been the future pope’s owner.

Pope Pontian controlled the Church for more than five years before the emperor had him exiled. He spent his last days toiling in the mines in Sardinia. Before his death, he abdicated the throne and left behind an open position. The clerics in Rome came together to elect a new pope and settled on Anterus. He became the official pope on November 21, 235, less than two months after Pontian abdicated.

Acts of the Martyrs

The persecution of Christians was common during this era due to the opposition led by the emperor. As pope, Anterus began gathering documents called the Acts of Martyrs. These documents contained testimonies from witnesses who saw the martyrdom of popes and other individuals in person. He worked with others to gather as many documents as they could find and then sent them to the Roman Church for storage in the archives. There is some debate as to whether he gathered those documents, but some claim that it was the reason he was martyred. Pope Clement I was the first pope to collect the Acts of Martyrs. He appointed several notaries and tasked them with finding those documents and keeping them safe. Though Anterus ruled more than a century later, he continued working with notaries in the hopes of securing those stories and accounts for the future. The pope specifically looked for the documents that the original notaries collected.

Some believe that Pope Anterus was martyred because of the official eyewitness documents. Others believe that it was more likely that he passed away from natural causes and due to the persecution he experienced at the hands of the emperor. The Church was waiting for Pope Pontian’s body to return from Sardinia for burial, but Pope Anterus passed away before that happened. His body was interned in the Cemetery of Callixtus and the catacomb there where he was later joined by the bodies of several other popes. At some point, his ashes were sent to the Church of Saint Sylvester. During the rule of Pope Clement VIII, portions of that church were restored. Workers found the ashes of the former pope in 1595 and had them moved to a safe location. A portion of his original resting place is still visible in the Catacomb of Callixtus. It looks like a large slab and has the faint remains of the Greek word for bishop on it.