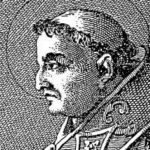 False teachings and movements based upon them gained notoriety in the Fifth Century. As the 43rd Pope, Saint Celestine I battled against them, earning the title “The Heresy Fighter.” His time in the papacy included restoration of a house of worship and a connection to a day in March celebrated in the United States and other parts of the world. Below are some facts about Pope Celestine I.

The Church commonly and traditionally taught that Jesus was fully divine and fully human. That means Jesus was both God and a man in the same person.

Nestorianism contradicts the orthodox view of Jesus. The patriarch of Constantinople, Nestorius, advanced the heresy that the divine Jesus and human Jesus existed as separate beings. As such, the Virgin Mary stood as the mother of the separate human Jesus rather than as the “mother of God.” Church leaders, including Constantinople and Saint Cyril, the patriarch of Alexandria, objected to the teaching.

Pope Celestine I called the bishops to Rome in A.D. 430 to address the matter. At this synod, he rejected Nestorianism and commanded Nestorius to stop teaching his heresy or face excommunication from the Church. With Nestorius continuing to spread the doctrine of a separately divine Jesus and separately human Jesus, Celestine I brought together the Council of Ephesus in 431. The bishops at this conference condemned Nestorianism.

Celestine I continued the Church’s battle against Pelagianism. Named after Pelagius, a monk from Britain, this movement rejected the Church’s teaching of “Original Sin” and that redemption for sin came through God’s grace. In the concept of “Original Sin,” all humans are sinful because Adam sinned against God by eating of the forbidden fruit in the Garden of Eden. Pelagianism taught that only Adam was declared guilty and that the rest of humanity was not condemned. Humans could earn eternal life through works.

With Pelagianism vanquished, Celestine turned his efforts to resisting a less-extreme version of Pelagius’ teachings. Semi-Pelagianism considered salvation to be initiated by God’s grace, but completed by human works. The Pope wrote bishops in Gaul, the region which now includes France, Belgium, Luxemburg and portions of Italy, Germany and the Netherlands, against Semi-Pelagianism. He prohibited bishops from criticizing his friend Saint Augustine, who taught that salvation was solely the work of God.

Novatianism represented another of the false teachings roaming throughout the Church. Having its origins in A.D. 250, the movement believed that bishops could not forgive those guilty of certain “mortal” sins such as idolatry. Such transgressors, along with those who committed sex outside of marriage (fornication), adultery and murder, were not to be baptized in the view of Novatianism. Celestine responded to this heresy by closing Novatian churches.

Quick Facts on Pope Celestine I

*Celestine I was born sometime in the mid 350s.

*As with his exact birthdate, Celestine I’s birth name is not known. His father was named Priscus.

*Sources differ on the date that Pope Celestine I died. For instance, some place the date of death as July 26, 432. Others report it as April 6, 432.