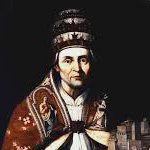 After living most of his life in seclusion, Pope Celestine V was elected pope at the age of 79. After only five months, he resigned from the papacy with the hope of returning to his life as a hermit. Celestine V is one of only a few popes to give up the title voluntarily.

Pietro – the boy who would become Pope Celestine V – had to work in the fields as a child after his peasant father died. At age 17, he became a monk in the Benedictine order, and eventually, he was ordained a priest. He preferred to spend most of his time in the wilderness fasting and praying.

Pietro’s devotion attracted several followers. While he desired solitude, the followers wanted to be with him so they could learn his ways. To help his followers, Pietro formed a new religious community that eventually took the name Celestines after his papal name. The order grew to thirty-six monasteries and more than 600 monks while Pietro led the group. Not one to seek power, Pietro handed off the leadership of the order so he could return to his solitary life.

The legend goes that one cardinal made the statement that the holy hermit Pietro del Morrone made a prophecy that a disaster would happen to the cardinals if a pope were not elected soon. To the surprise of many, the cardinals then elected Pietro unanimously. The fact that Pietro was not interested in politics or power made him the one person all of the cardinals could agree upon.

From the very beginning, Pietro was reluctant to be the pope. At first, he refused the position. Eventually, Pietro was persuaded by the cardinals and the king of Naples. Given his advanced age of 79 and his lack of political experience, he ended up being a weak and ineffective leader. The king of Naples controlled most of the decisions Celestine made.

Realizing his weaknesses as a leader, Celestine consulted with the cardinal who would eventually succeed him as Pope Boniface VIII. Under Boniface’s direction and his desire to give up his title, Celestine made his final decree which was a declaration for the right of resignation. He then promptly exercised that right and resigned after serving as pope for only 161 days.

Celestine planned to return to his life in the wilderness as a simple monk, but that would not be. Concerned that his enemies might use Celestine as someone to question his authority, Pope Boniface VIII had Celestine imprisoned in a castle. After only ten months of imprisonment, Celestine died. Rumors started spreading that Boniface had Celestine executed.

After Boniface died, some of Celestine’s supporters nominated him for sainthood. In 1313, Celestine was canonized a saint.