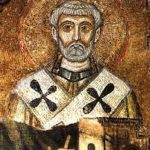 Clement I was the fourth pope of the Catholic Church and reigned for more than 11 years. He is also known as Saint Clement and was a martyr for the Church. You can find out about his martyrdom and life in this article.

Born circa 35 AD in Roma, Italy, Clement was Italian by birth but grew up in the Roman Empire. Known as Clemens by birth, he picked the Clement name upon his appointment and became the first pope to use this name. Pope Linus trusted Clement so much that he handed over the reins of the Church to him and hand-picked him as the next pope. Following Linus’s death, the Church instead appointed Anacletus who reigned for just a few years. Records from this era are confusing and often list Clement as the first to the third pope to serve after Peter. During the 19th century, historians identified him as an emancipated slave. Many now believe that this identification was a mistake.

Sometime around 96 AD, Clement traveled to Corinth and established rules in a local church that the religion used for many years. He stated that bishops should rule the church and identified them as overseers of the church. The pope would also identify elders within the religion and give them roles. During his teachings, he did not make note of his position within the church or identify roles for popes.

The Acts of Martyrs published in the fourth-century claim that Emperor Trajan banished Clement to Chersonesus, which was an ancient colony in Greece that later became part of Ukraine. Used as a penal colony for many years, this was where he experienced his first miracle. Legend claims that he arrived to find prisoners dying of dehydration and immediately began looking for a water source. When he saw a small lamb standing on top of a hill, he followed the animal and struck an ax in the ground where it stood, which released a clear and steady stream of drinking water. This miracle allegedly led prisoners to convert to Christianity.

Clement did not live long after this act. The emperor had him sent onto the Black Sea and tied to a heavy anchor. Those on the boat threw his body overboard and waited until he died. Some of his relics and bones are still in the area.

Quick Facts About Pope Clement I

Interesting Facts About Clement I

*The Inkerman Cave of Monastery of St. Clement was built I 1850 to honor the saint. It overlooks the Black Sea and claimed to once have his head and some of his other body parts in its archives before they were removed. The monastery is also close to where Clement was martyred.
*Cyril was a Byzantine theologian who traveled to Crimea in the late 860s. He claimed that he found the former pope’s body still attached to the anchor and buried on dry land. Cyril had most of the remains sent to the Basilica de San Clemente in Rome, which had his body enshrined. The Kiev Monastery of the Caves has some of his other remains.
*A Christian church in Ukraine is home to 1 Clement or the First Epistle of Clement. This is a letter that the pope wrote also the oldest Christian document authenticated after the New Testament. It asked the church to reinstate several bishops who were stripped of their titles and benefits.
*The Epistles on Virginity and the Second Epistle of Clement were documents once believed written by Clement. Historians now attribute only Clement 1 to the former pope.
*Clement is recognized as a saint by several churches. The Catholic Church recognizes his feast day on November 23, while Byzantine churches celebrate him one day later. While the Roman Catholic Church identifies his feast date as November 25, this date moves to the 29 in the Oriental Orthodox Church. St. Clement’s Church in Russia was built in his honor and to recognize him as a saint, but it is now a Russian Orthodox Church.