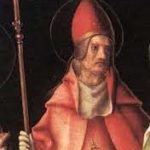 Pope Cornelius was the successor to Pope Fabian and one of several popes in a row who were martyrs, which is why he is recognized as a saint. He was Roman and the 21st leader of the Church. You can read this article to find out about his martyrdom and papacy.

Very little is known about Cornelius before his papacy. He was born circa 180 AD in Rome, Italy to Italian parents. As they called him Cornelius from birth, he was one of the first popes to use his given name during his papacy. He likely held other positions within the Church as other popes did.

His papacy began in March of 251. Though some records list the official date as March 6, others show that he accepted the position around the 13th of the month. He inherited a papacy known for the persecutions that followers and the previous pope faced. Emperor Decius reined for more than two years and spoke out against Christians. One of his last actions called for Christians to reject the Church. Those who refused were martyred on his orders. Cornelius only became pope after the emperor had Pope Fabian martyred.

Cornelius also faced issues relating to the rise of Novatian theology. Novatian was a ruler who created the Novatianism movement and became the antipope in 251. He believed that those who rejected the Church to save their lives should not be allowed back and garnered hundreds of followers who agreed with him. Cornelius welcomed those men and women back to the Church, which led to a feud between the two. Novatian claimed that Cornelius was not the true pope and wrote letters in the hopes that others would side with him. During an official synod, 60 bishops sided with Cornelius and named him the true pope. They also agreed to excommunicate both Novatian and his followers.

Emperor Gallus was the successor to Emperor Decius and took control following the man’s death in the early 250s. He quickly set about following the policies established by the former emperor and exiled Cornelius sometime around 252 to 253. The pope spent his final days in Centumcellae outside of Rome. It was here that he wrote his final letters, which historians think proves that he came from a poor family as he wrote in Latin rather than the other popular languages of the time. One of those letters discussed exorcisms, which led to the Church changing canon law and requiring organizations to have exorcists.

Though some modern sources claim that he was beheaded, reports from the era claim that he died due to the hardships of living in exile and his advanced age. His relics were sent to various areas with many going to churches in Germany. Recognized as a patron saint, Cornelius is the saint of lovers.