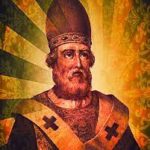 Pope Damasus I was the 37th pope, leading the Church for over 18 years. Though both of his parents were Lusitania, he was born in Rome. In this article the exciting facts of the papacy and life of Pope Damasus I will be discussed.

The Edict of Milan

There is no question that the was a trying time for the Church. It led to the eventual banishment of the Roman Pope Liberius in 354. At the time, Pope Damasus I was the archdeacon and decided to go with his Pope Liberius into exile.

With Pope Liberius’ death in 366, Pope Damasus I was elected to the papacy. This was, however, contested due to dissenting political groups within the Church. A small group of the clergy named Ursinus, a deacon, pope. No clear choice was made and as a result both men were made pope, leading to violent confrontations.

Though there is some debate on what actually occurred, it seems that two major events played out around Basilicas. Those for Pope Damasus I fought the Ursinians at the Julian Basilica over the course of three days. In response, the Ursinians carried out a violent attack of 137 people at the Basilica of Sicininus. This led to Roman prefects banishing Ursinus to France.

This did not stop the violence, as Ursinians kept attacking Pope Damasus I’s sovereignty. In 378, Pope Damasus I was officially made the pope, while Ursinus was fully condemned.

Pope Damasus I led a very minimalist life, focusing on purity rather than opulence. In this regard, he rejected Arianism. Supporters of Arianism, a heretical view of the Church, tried to besmirch Pope Damasus I with false accusations in his early career.

Among other things, Pope Damasus I made Latin the language of the Church and proclaimed that the Roman state was Christian. He also suggested that his secretary, Jerome, re-translate the Bible’s Old Latin text into something more attainable for the masses. This led to the writing of the Vulgate.

Quick Facts About Pope Damasus I

Interesting Facts About Pope Damasus I