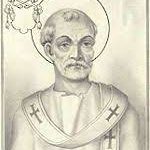 Pope Saint Eusebius was one of the foundational early leaders of the church. His reign occurred during the period when Christianity was not yet the official religion of the Roman Empire. He issued numerous major pronouncements and fought stringently on one side of the question of lapsed Christians fleeing from the persecution of the Roman Empire. This persecution made him one of the many early popes who died for the cause of the church. It is a major reason why he has been so venerated in the past 1,700 years.

Pope Saint Eusebius was pope for four months in 310. During his time as pope, he took a strong stance on the question of lapsed Christians. Eusebius believed that these lapsed Christians could only regain admittance into the Catholic Church once they performed penance. Citing the severity of the persecutions, many lapsed Christians wanted to rejoin the church immediately. The Roman Emperor at the time sided with the lapsed Christians and exiled Eusebius to the island of Sicily. He was executed soon after.

– Born: In Greece at an unknown time.

– How he died: Eusebius was executed soon after his exile to Sicily. He did not live long after being banished by the Roman Emperor Maxentius.

Eusebius was one of 84 popes to be canonized as a saint. Of these popes, only seven have been canonized in the past millennium. Eusebius was also interesting as a victim of the Decian persecutions. These are usually regarded as one of the least-studied persecution periods for Roman popes. It was a time where study is limited because of a lack of sources. This period occurred because of a decree by the emperor Decius that forced all people living in the Roman Empire to make a sacrifice to the Roman gods. Christians were bound by their monotheistic religion not to commit such an apostasy. Those who did and wanted to come back into the church posed a dilemma to leaders such as Eusebius.

The Decian persecutions were severe. But they did not reach the expanse and significance of many other significant Christian persecutions. The largest and last major persecution of Christians by the Roman Empire occurred later in the 3rd century. Diocletian, one of the last powerful Roman emperors, led a massive, systemic persecution that only completely ended during the reign of Constantine in the 4th century. Eusebius would be one of the last popes to reign before this sea change in Roman policy.