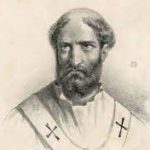 Eutychian was one of the early popes of the Catholic Church and likely reined from 275 to 283. Though he was the 27th pope, there isn’t much information about his life or papacy available today. You can learn more about Pope Eutychian in this article.

Historians know very little about the life of Pope Eutychian. He was born in Luna, Italy sometime around 240 and likely used the name Eutychianus before abbreviating this name when he became pope. Luna was then part of the Roman Empire and later changed its name to Luni. Some believe that he was born in either Tuscany or Eturia, which would make him Tuscan by birth.

Pope Saint Felix I led the Church from 269 to 274 when some believed that he died as a martyr. The bishops working for the Church spent just seven days deciding on the next pope before they elected Eutychian. He likely worked as a deacon or a bishop, which would make him familiar with the bishops. Eutychianus then abbreviated his name to Eutychian.

Crisis of the Third Century

Eutychian became pope during a time called the Crisis of the Third Century. This was a period where the Church was in turmoil due to issues with the Roman Empire. The Roman Empire was only 20 years old at the time, but it faced many issues as opponents assassinated some of its emperors. Just a few years before Eutychian became pope, the empire watched as Syria split off to become a separate empire. There were also many battles in Gout that affected those in Rome. The Church itself waged an internal battle as to the true meaning of the Holy Trinity. It was these problems that Eutychian inherited as pope.

Legends from this era claim that Eutychian was one of the first popes to bless crops. These stories claim that he visited farmers across Rome and granted them blessings that their crops would grow. He also allegedly let parishioners bring grapes and other crops such as beans to church and place them on his altar for a blessing. There is no proof that these stories are true. Some facts show that it took several centuries before popes began blessing crops.

Another popular legend associated with Eutychian claims that he buried martyrs during his rein. Some stories state that he buried more than 200 or 300 men and women on his own without help from anyone else. The legends claim that he wanted to ensure that they received a proper burial and that they would enter heaven. As with some of the other stories attached to his name, there is no historical proof that these are true.

As was the custom at the time, the Church had his remains moved to the papal crypt at the Catacombs of Callixtus. Located on Appian Way, this crypt is now part of the Catacombs of Rome. You can visit and pay your respects to Pope Eutychian and other popes buried there through the fourth century.

*So little is known about Eutychian that the Church isn’t even sure how long he served. A biography of popes published in the 15 century states that he was pope for more than eight years. Early records claim that his papacy lasted for just 10 months.
*According to official records, Eutychian was likely 35 when he became pope and 43 when he passed away. This would make him one of the youngest popes in the history of the Church.
*The Catacombs of Callixtus was a popular burial spot for martyrs, popes and other religious leaders. Eutychian would be the last pope ever interred in the crypt here.
*Though some early records claim that Eutychian was a martyr, he likely died of natural causes. The Church had some issues at the time but was generally at peace. Both the next pope and several who followed were martyrs.
*In the Catholic Church, parishioners celebrate the life and times of Pope Eutychian with a feast day on December 8 every year.